Bitcoin appears to be breaking below its ascending channel pattern on the 4-hour time frame to indicate that a selloff is underway. Price still has a few support areas to break before confirming the potential reversal.

The 100 SMA is above the longer-term 200 SMA on this time frame, which means that the path of least resistance is to the upside. In other words, there’s still a pretty strong chance for the uptrend to resume. The 200 SMA is holding as dynamic support at the moment, possibly leading bitcoin to bounce back to the highs around $5000. 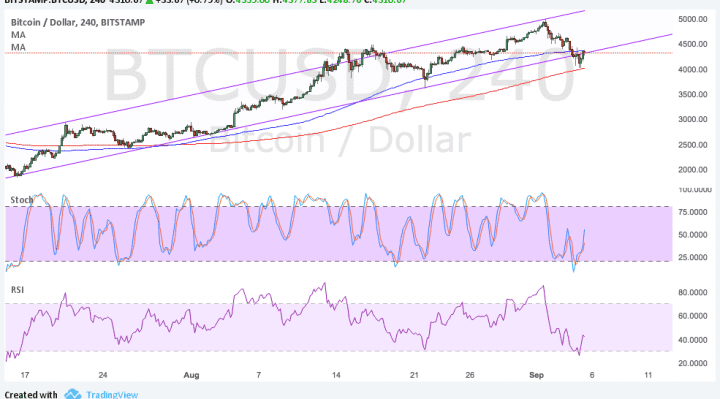 News that China has banned ICO financing has hit the cryptocurrency industry, weighing on bitcoin price. Recall that earlier this year, fears of tighter regulation from China lead to sharp declines for bitcoin as investors worried that it might mean a reduction in trading activity and volumes in one of the largest markets for bitcoin.

Among the government agencies that supported the ban was the Chinese central bank. In particular, it was deemed that ICOs are an unauthorized funding method, and there’s a huge number of start-ups that rely on ICOs as a means to raise funds by selling off new digital tokens to the market.

However, bitcoin could still find support from rising geopolitical tensions, particularly those stemming from North Korea’s missile tests. This weekend, Pyongyang conducted one of its largest missile launch tests, which some say could be strong enough to contain a hydrogen bomb and could be in range of reaching the US.

The White House has condemned this action and reiterated that it has a wide range of tools at its disposal and that it will not hesitate to use these if its mainland, territories, and allies are being threatened.