Bitcoin seems to be done with its short-term selloff as a complex inverse head and shoulders is forming on its 1-hour chart. Price has yet to break past the neckline around 4600 before confirming its potential rally.

However, the 100 SMA is below the longer-term 200 SMA for now so the path of least resistance is to the downside. This means that the selloff is more likely to resume than to reverse.

Stochastic is also indicating overbought conditions, so buyers might want to take a break from here and let sellers take over. RSI is on the move up to indicate that there’s some buying pressure left to take price higher.

The chart pattern spans 4000 to 4600 so the resulting rally could be of the same size, possibly taking bitcoin to the 5200 levels. Price has moved past the 200 SMA dynamic inflection point, which suggests that bulls are trying harder. 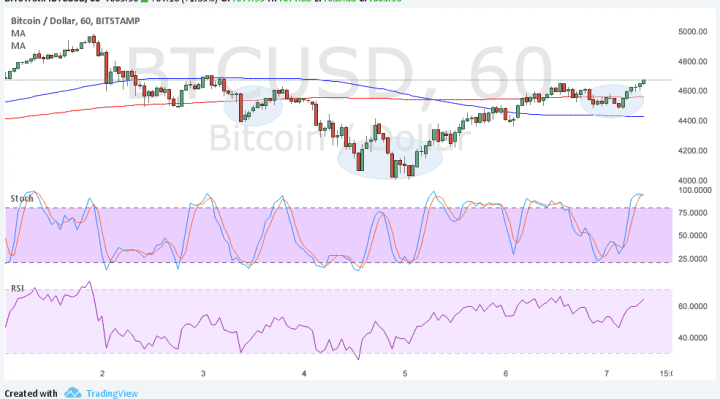 The recent drop was spurred by news that China has banned ICO offerings but it looks like bitcoin bulls have taken it in stride. Dollar demand has also ticked higher on the debt limit extension to December since this would allow the US government to avert a shutdown.

Looking ahead, geopolitical risk is likely to play a role in bitcoin price action as traders wait for the next big catalyst. Either that or consolidation could be the name of the game for a bit longer.

As for the dollar, the FOMC statement might be the next directional move as confirmation that the central bank won’t be hiking interest rates anytime in the remainder of the year could lead to bearish price action. Coupled with persistent tensions from North Korea, this could be a recipe for more dollar weakness and bitcoin gains.