Bitcoin has previously broken below an ascending trend line and has pulled up for a retest. The broken trend line support seems to be holding as resistance, possibly pushing price back to the swing low.

However, the 100 SMA is still above the longer-term 200 SMA so the path of least resistance is to the upside. This suggests that there’s still a chance for a uptrend to resume, even as the gap between the moving averages is narrowing to indicate weakening bullish momentum.

Stochastic is also turning lower from the overbought area to signal a return in selling pressure. RSI has been on the move up but also appears ready to head back south again. Nearby support is located at the 100 SMA dynamic inflection point then at the 200 SMA dynamic support around the 50% Fib extension. 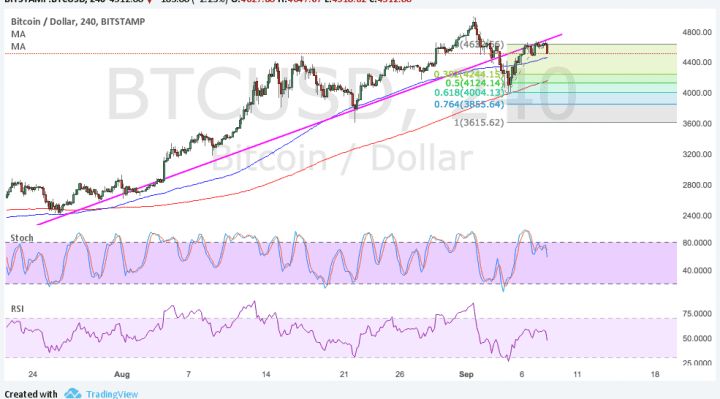 Market appetite for US dollars seems to be returning as US officials are turning the spotlight on tax reform. This follows the decision to extend the debt limit to December, which signaled that Democrats, Republicans, and President Trump are willing to see eye to eye.

For now, though, there’s still a degree of risk aversion and dollar weakness left while traders estimate the potential impact of the hurricanes on the US. Rebuilding efforts are already underway after Hurricane Harvey struck Texas but Hurricane Irma is just making its way towards Florida. Another hurricane is also expected to hit the US afterwards.

As for bitcoin itself, the lack of positive catalysts has made it challenging for the cryptocurrency to sustain its climb. Earlier in the week, reports that China banned ICO funding has led to a sharp selloff but profit-taking quickly took place and traders were able to shrug off these sentiments.