The price of bitcoin (BTC/USD) on Thursday bounced off session lows below the key level $8,000 to surge above $8,100 in the afternoon. Bitcoin fell since the beginning of the week dropping from a weekly high of about $8,380 to bottom at around $7,920 before making a later recovery on Thursday.

The price of the pioneer cryptocurrency continues to oscillate in a sideways movement within the $7,800-$8,600 range without a clear direction amid mixed global economic and geopolitical conditions.

From a fundamental perspective, bitcoin is trading at the back of a mixed period in terms of economic data and geopolitical events.

In the UK, there are significant developments around Brexit after news emerged claiming that a deal had been reached to finalize the UK’s separation of the EU economic block. In the US, the trade talks with China also appear to have taken some positive steps with Trump saying that talks were now in “Phase1”.

On Thursday, the US continuing and initial jobless claims beat expectations with 1.679M and 214k respectively while Building Permits change of -2.7% was better than the consensus estimate of -26%. However, Housing Starts missed expectation 1.320M with 1.256M after posting a change of -9.4% versus the expectation of -8.6% for September. 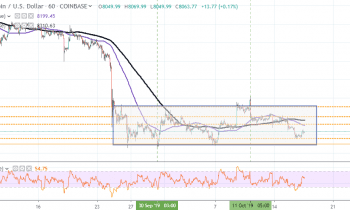 Technically, the price of bitcoin appears to have recently bounced off the oversold levels of the 60-min RSI Indicator. Bitcoin price also appears to be trading below the current levels of the 100-hour and the 200-hour SMAs, which indicates a short-term bearish pressure. 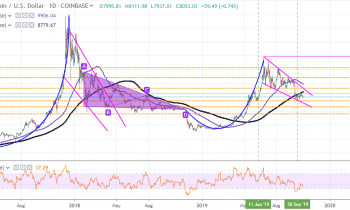 In the daily chart, the price of bitcoin appears to be trading in a mirror image to a previous pattern formation experienced between 2017 and early 2018. Bitcoin price is coming off a period of a sharp spike as it trades in a descending wedge similar to the start of 2018.

What followed after was a consolidative triangle formation that ended with a bearish breakout. If this is to follow in the current trend, then traders can expect a period of consolidative trading before another break occurs.

In summary, the price of bitcoin appears to be trading under extreme bearish pressure in the long-term, but in the short-term, the bulls are battling to take control.