Bitcoin was trending flat on Tuesday as investors’ focus remained fixed on the outcome of Brexit and the US-China trade deal.

The benchmark cryptocurrency surged 0.03 percent to trade at $8,212.74 as of 18:14 GMT. At its intraday high, it was trading at $8,317.14. Bitcoin’s downside, as seen past the London afternoon session, coincided with gains in the altcoin market. Top coins, including Bitcoin SV, Chainlink, and Cardano, attracted capital from the bitcoin market. The outflow appears as the primary cause behind Bitcoin’s sideways action on Tuesday. 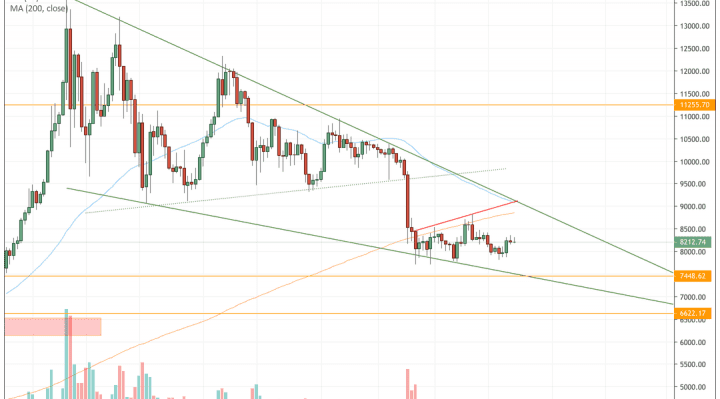 The downside movement also appeared alongside uncertainties arising around the Brexit deal vote. An hour before the time of this writing, the UK Prime Minister Boris Johnson’s government lost the motion as MPs voted against a Brexit deal before October 31. The update sent the pound down by 0.38 percent against the US dollar while spelling troubles for the FTSE 100 index that could open tomorrow in a negative zone.

Brexit appears bullish for bitcoin, a non-sovereign asset that proposes to behave as a safe-haven on the sidelines of macroeconomic calamities. The political setback for Johnson could have him announce a general election in the UK, which, as he believes, would have him win and pass the Brexit motion. Nevertheless, for now, the deal is looking at an extension. That could reflect hugely on investors’ sentiment in the UK’s risk-on assets.

Bitcoin had surged by about 0.65 percent against the pound shortly after the Johnson government lost the parliament vote.

Things are brighter on the other side of the continent. US President Donald Trump on Monday announced that their trade deal with China was heading into a right direction. Global stocks inched higher on the news, with benchmark equity markets across Japan, China, and Hong Kong each closing after posting modest gains.

S&P 500 turns lower after U.K. government loses bid to fast-track Brexit deal so it passes before the Oct. 31 deadlinehttps://t.co/haoZoDV175 pic.twitter.com/GGviMWv1CG

Bitcoin’s price against the dollar was looking to dip further after the S&P 500 index opened in negative territory on Tuesday. As Fundstrat’s Tom Lee noted in September, bitcoin traders are actively watching the US stock market’s next big move as a signal to enter new long positions. It is due to Fed’s further rate cuts, coupled with ongoing quantitative easing programs, that could send equities higher. More dollars into the market is also bullish for bitcoin.