Bitcoin continued to trend hand-in-hand with global equity markets as investors’ concerns mounted over a potential hindrance in the ongoing US-China trade talks.

Stock indexes fell on Thursday after President Trump criticized China for delaying the “phase one” trade deal. Futures linked to the Dow Jones Industrial Average dipped by 0.1 percent. Meanwhile, Hong Kong’s benchmark Hang Seng Index shed 1.6 percent and pan-continental Stoxx Europe 600 index declined by about 0.5 percent. On his visit to Apple’s manufacturing unit in Texas, Trump reiterated that China is not buying US agricultural products en masse, which might prompt him to introduce fresh tariffs on Chinese imports.

Investors’ appetite for risk-on assets also dwindled after the US House of Representatives passed a pro-Hong Kong legislative. The bill, which is yet to be signed by Trump, would seek an annual review of trading deals with the disputed Chinese region.

The tale that bitcoin behaves as a risk-off asset in times of global market uncertainties received support from factual data earlier this year. The benchmark cryptocurrency surged by more than 200 percent against the escalating trade tensions and a subsequent devaluation of China’s national currency Yuan. Investors’ appetite for bitcoin was high because they wanted to use its non-sovereign status as a mean to bypass China’s capital control. The sentiment, therefore, helped the cryptocurrency rise substantially – to as high as $14,000 by the end of August. 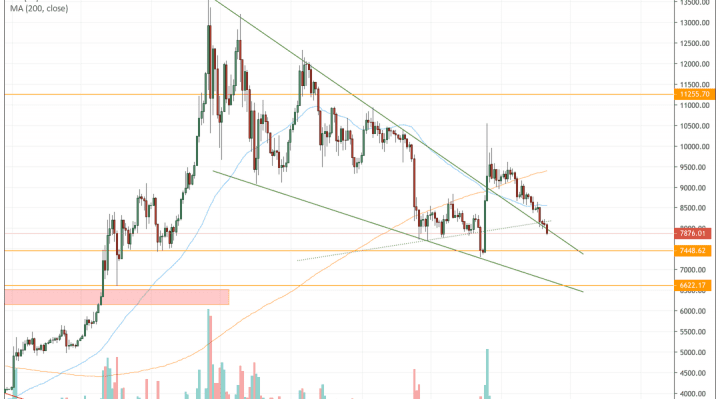 Bitcoin has corrected by more than 40 percent from August high | Source: TradingView.com, Coinbase

Nevertheless, the safe-haven narrative has lost its shine in the past and a current financial quarter. It appears traders were moving the prices up out of speculation that big investors would purchase bitcoin against the mounting global economic risks. While that didn’t happen on a massive scale, the same speculators started exiting their long positions on the local price tops, therefore crashing the price.

Cryptocurrency analyst Charles Edwards blamed it on the miners, a decentralized network of people/institutions that validate bitcoin transactions on its public blockchain for monetary rewards also derived in the cryptocurrency. Edwards noted that Bitcoin’s Hash Ribbon – a gauge to measure the cryptocurrency’s hash rate health – underwent a bearish crossover. In simple terms, miners’ input costs went above their bitcoin incomes, forcing them to either shut down operations or sell their stash on the over-the-counter market.

It is impossible to know how long a Miner Capitulation will last.

It could be anywhere from 1 day to several weeks.

Based on similar historic occurrences. I expect this capitulation will be short lived.

Many analysts are now targetting $6,000 as the next support target. It could be one of the reasons why mainstream investors are keeping a safe distance from bitcoin as the US-China trade talks hit an impasse.