Bitcoin prices slid on Monday, extending their declines from the weekend session, to log its worst sell-off since March.

The benchmark cryptocurrency established an intraday low of $30,100, down 28.31 percent from its record high of $41,986 from January 8. Elsewhere in the crypto market, almost all the major altcoins, including Ethereum, XRP, Bitcoin Cash, Litecoin, and others, fell by similar margins.

Overall, the cryptocurrency market lost as much as $298 billion in the last three days. 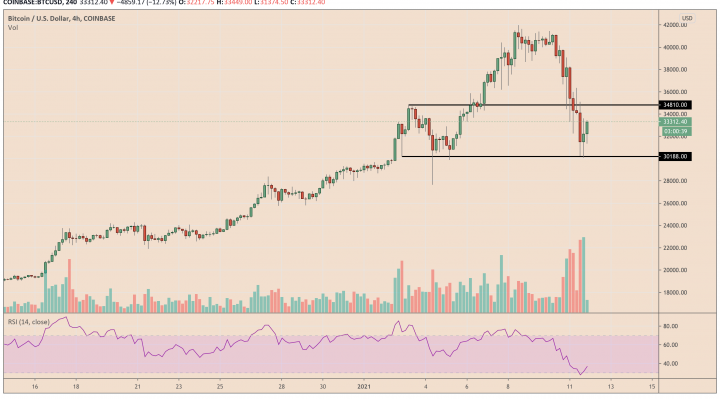 Bitcoin crashed by almost 30 percent from its record highs. Source: BTCUSD on TradingView.com

The latest losses came after a bullish start to 2021 for crypto assets as the prospects of additional stimulus in the US swelled the pessimism about the US dollar. Bitcoin rose by more than 44.8 percent to its record high in the year’s first week. The same period saw the US dollar index declining by up to 0.80 percent.

As of Monday, the greenback was up by as much as 1.68 percent from its 2021 low of 89.20. That partially pushed Bitcoin lower, given its negative correlation with the American note. Stocks, gold, and oil also fell in tandem, albeit to a limited extent.

Bitcoin’s $10,000 plunge also came in the wake of an outage on Coinbase. According to Willy Woo, a prominent on-chain analyst, the US exchange stopped taking buy orders after BTC/USD fell towards $38,000. That created a $350 Bitcoin price gap between the pair’s bid on Coinbase and other exchanges.

“Unlike previous crashes in the past 2 years, where over-leveraged markets lead by trader liquidation, this one started on spot markets, then was greatly amplified by a single exchange partially failing, yet did not turn itself off for the good of the ecosystem,” he added.

Independent market analyst Kevin Svenson said Bitcoin would rebound long-term as long as the US government adds to an already-ballooning fiscal deficit via fresh stimulus packages.

US president-elect Joe Biden has committed that his administration would increase the previous Covid-19 aid size from $900 billion to some trillions of dollars. In doing so, the Democrat would send direct checks worth $2,000 to American households while committing additional monetary help to small- and medium-scale enterprises.

“I think [the Bitcoin price crash] is going to be shorted lived considering the talks of even more stimulus, which will lead to further devaluation of the Dollar,” noted Mr.