Bitcoin drops like a rock and is almost to reach another downside target. Price seems unstoppable on the Daily chart, so it could still reach fresh new lows in the upcoming days. The current drop is natural after the rate it has failed to run away from the 6000 psychological level and to close and stabilize above the 7000 level.

It has reached fresh new lows today, the price wasn’t so low since October 2017. A further drop will force the altcoins to drop significantly as well and many projects will die. 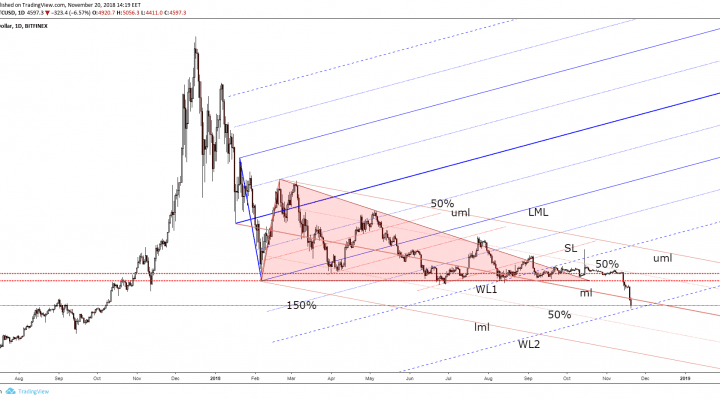 Bitcoin continued to drop after the failure to retest the broken 6000 psychological level. The aggressive breakdown is natural after the extended sideways movement. It is almost to reach the second warning line (WL2) of the ascending pitchfork, which could pause the bearish momentum. It has slipped below the median line (ml) of the descending pitchfork, but it could come back to test and retest it before it will drop much deeper. I’ve told you in the previous reports that a valid breakdown below the 6000 psychological level and most important below the median line (ml) it will really confirm a broader downside movement.

Personally, I believe that we may have a potential rebound only if the rate will make a significant false breakdown below the WL2 and below the median line (ml). You can notice that the next significant downside target will be at the downside 50% Fibonacci line of the descending pitchfork. A failure to approach and reach the 50% line it will announce a potential rebound on the Daily chart. The perspective is bearish and the rate could reach the 3000 psychological level in the upcoming period.