Bitcoin was consolidating sideways on Thursday as weak US jobs data set up the stage for a rough fourth quarter.

The benchmark cryptoasset was trading near $8,301, down 0.95 percent as of 0902 GMT. It remained directionless for the seventh day in a row, reflecting investors/speculators’ cautious outlook towards the market. The sentiment raised fears for a further downside action, especially after bitcoin’s unexpected breakdown from an otherwise strict trading range last week. The cryptoasset had dropped by more than $2,000 within a matter of a few hours. 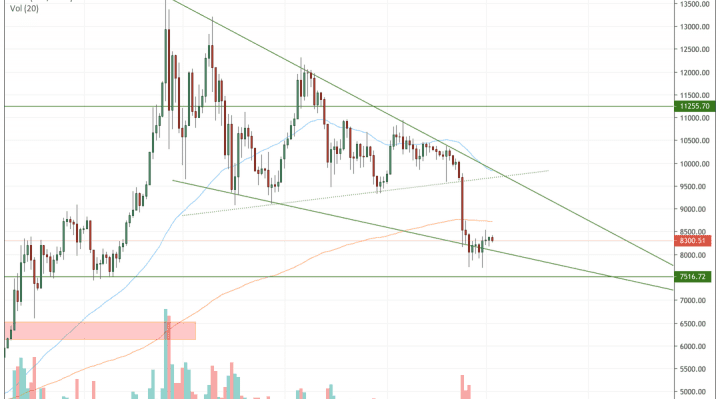 Analysts believe bitcoin’s boring consolidation action after a sharp downside move hints further bearish correction. Twitterati Crypto Cred noted that it is wise for traders to stop trading the sideways action since bitcoin has a history of extended the bias brought by “big range breakouts.” Excerpts:

There are 2 reasons I’m not knife-catching $BTC as a trader.

1. I’m bad at it. Specifically: trading the first range after a big move. Not gonna trade where I have no edge.

Bitcoin’s drop and subsequent consolidation came amidst a worsening global economy. Global markets kickstarted the fourth quarter on a negative note as weak jobs data and manufacturing reports from the US clouded investors’ sentiments. The downside risks intensified further because of the latest escalation in trade disputes between the US and Europe. The Donald Trump administration opened a parallel trade war front after it decided to introduce 25 percent tariffs on a wide range of European imports this month.

The collision of bad fundamentals sent global equities down. From Tokyo to New York, markets suffered considerable losses, reflecting investors’ willingness to move from risk-on assets. Instead, they moved to the safety offered by government bonds and gold. The yield on 10-year German Bunds, for instance, went three basis points lower to minus 0.544 percent. At the same time, US benchmark 10-year Treasury yields fell to their three-week low, as investors expected the Federal Reserve to introduce more rate cuts to safeguard the economy from trade war impact.

“If you were sitting around for some good geopolitical news to offset the softness in the macro data, that isn’t happening,” said David Lafferty, chief market strategist at Natixis Investment Managers. “Things are getting dicier for [US President Donald] Trump and impeachment. [Elizabeth] Warren is surging in the polls, and Boris Johnson is continuing to threaten a hard Brexit.”

Meanwhile, investors looked wary about bitcoin’s credentials as a safe-haven asset, as visible via its dismissive performance against the ongoing economic crisis.