The benchmark cryptocurrency plunged by a modest 0.31 percent, or circa $30, to $9,749 ahead of the London opening bell. Its move downhill followed a week of flat price action, revealing an underlying bias conflict as traders aim to retest a sound resistance level at $10,000. 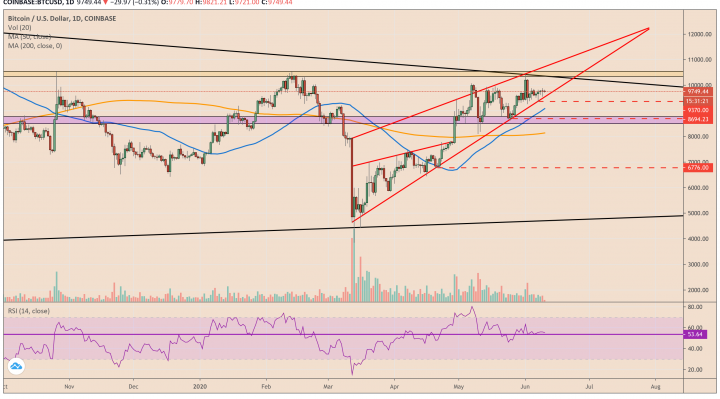 BTCUSD flat ahead of the FOMC decision | Source: TradingView.com, Coinbase

Meanwhile, Bitcoin continued to receive similarly sound support from $9,370. The price now waits for a minor breakout in either direction, with a macroeconomic narrative hinting a breakdown.

Bitcoin’s flat price trajectory drew cues from the U.S. stock market. The benchmark S&P 500 fell by more than 1 percent a day after it recoupled its entire yearly losses. The correction followed a remarkable 40 percent price recovery from the index’s mid-March lows.

Traders took out their intraday profits ahead of the Federal Reserve’s conclusion of its two-day meeting on the state of the U.S. economy. Analysts anticipate that the central bank would keep its benchmark interest rates near zero while maintaining its quantitative easing.

Meanwhile, investors will be watching whether or not the stock market could continue its V-shaped recovery. If the Fed gives a negative economic outlook, demand will shift from stocks to safe-haven assets like gold and cash. Bitcoin, which also behaves as a hedging asset, may fall owing to its erratically positive correlation with the S&P 500.

Irrespective of a conflicted macroeconomic and daily technical outlook, Bitcoin is still maintaining its medium-term bearish bias as it holds above its 50-weekly moving average (or 50-WMA). 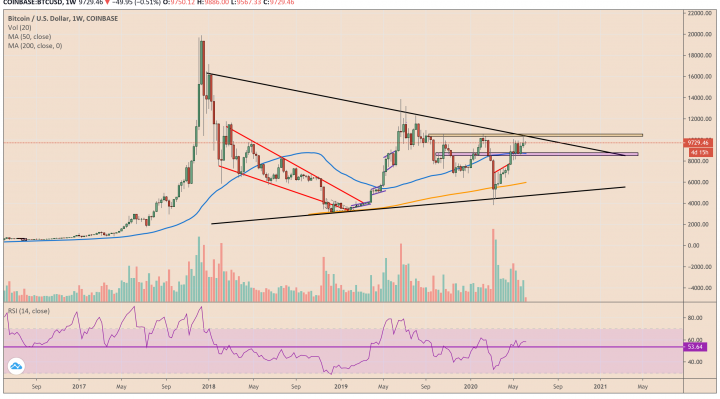 A bearish correction on the daily charts could have bitcoin test the 50-WMA on the weekly one. If the price holds it as a support level, then a bounce back towards $10,000 is possible. If it breaks bearish below the 50-WMA, then an extended downtrend towards the 200-WMA (near $6,000) could happen.