Bitcoin Futures Premium Rises 100% in a Month on ETF Expectations

The annualized premium of CME Bitcoin Futures over its spot rates doubled in a month amid bets that the U.S. Securities and Exchange Commission would approve the first bitcoin-based exchange-traded fund (ETF).

In detail, the Bitcoin derivatives premium rose to 15% in recent days versus an average of 7.7% across the first nine months of this year. That coincided with an increase in CME open interest for Bitcoin Futures, which reached $3.2 billion Thursday, almost $40 million short of its record high established on Feb 21, 2021.

A report published by Commodity Futures Trading Commission showed the commercial sector as a major force behind bullish open contracts in the CME Bitcoin Futures market. They held positions worth 10,000 BTC at the time of publication—on Oct 5, 2021—which came to be equivalent to $620 million, up 75% in the two weeks before the date.

On the other hand, the report showed a spike in short positions held by hedge funds and retail investors. But their heavy bias to bearish positions did not impact the real Bitcoin rates—BTC rose from below $50,000 to above $58,000 recently—it appeared short contract holders merely used the futures market as a hedge against their long positions in the spot markets. 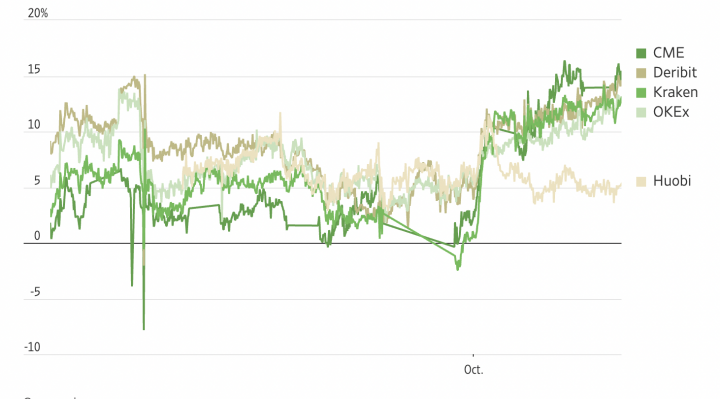 That is—again—because of the higher premium available in the derivatives market. In detail, traders bought the spot positions and shorted the futures contracts simultaneously because the two prices will converge in the future. The massive gap between Bitcoin spot and futures prices prompted institutions to buy contracts.

The CME plans to raise the cap on Bitcoin Futures contracts that a single firm can hold. Analysts believe that the decision would enable big players, such as an ETF, to gain elaborated exposure in the Bitcoin market. Nevertheless, the SEC has not approved a single Bitcoin ETF so far that allows funds to invest in physical cryptos or crypto-backed derivatives.

But based on recent comments from SEC commissioner Gary Gansler, who noted that ETFs applying under a specific regulatory category could gain approval, it is likely that some funds would receive a go-ahead soon. As a result, the SEC may either approve, reject or delay the proposals of ProShares, Valkyrie Investments, Invesco, and VanEck in the next two weeks.

The expectations alone have helped BTC rise by over 25% this month.