Bitcoin Hits $11,000 on FOMC Sentiment; Correction or Rally Ahead?

The monthly gathering of the top Fed officials will conclude with a statement and press conference from their chairman Jerome Powell. Economists and market strategists expect the US central bank head to provide further guidelines on its higher inflation policy.

The Bank of Japan and the Bank of England will conduct policy meetings this week.

A general market consensus expects the Fed to stay dovish. It would mean a prolonged period of lower interest rates–between zero and 0.5 percent–and an extended bond-buying program. The US Congress’s failure to launch the second stimulus package could also increase the Fed’s pressure to go ballistic on US dollar printing.

That is fundamentally bullish for Bitcoin. A dovish outlook typically creates downside pressure on the dollar and bond yields. As a result, investors start reallocating their capital into riskier assets for better returns. The sentiment has so far favored equities and gold as well.

It is with the same expectations traders are increasing their spot long positions in the Bitcoin market. BTC/USD today closed above $11,000 for the first time in almost two weeks. 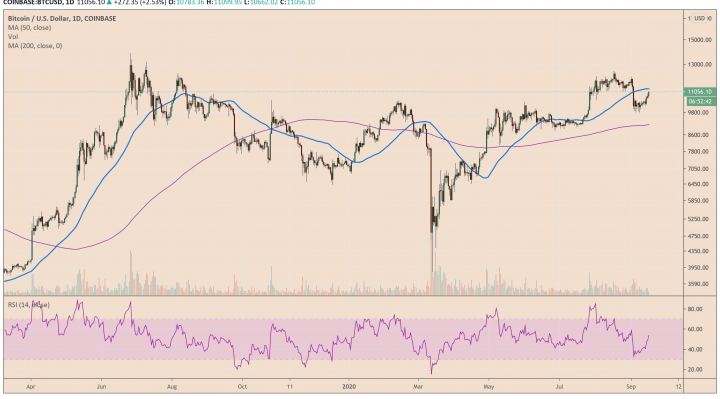 The gains came also as MicroStrategy, a public-traded firm, increased its size of Bitcoin holdings with a $175 million purchase. The company admitted that they bought the cryptocurrency to protect their reserves from dollar-led inflation. It now holds $425 million worth of BTC units.

“MicroStrategy is adopting a Bitcoin standard,” said one analyst. “Other companies will follow. Finally, central banks will follow (Switzerland likely to be the first.) A new gold standard for the digital age. A neutral store-of-value will create more checks and balances for governments.”

BTC/USD upside in the last 24 hours took the price above an Ascending triangle pattern that was maturing on an hourly chart. 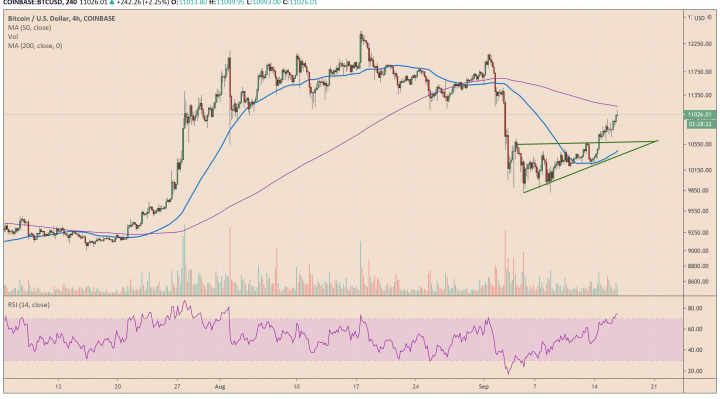 Typically, a breakout of a bullish triangle pattern sets a price target of as much as the maximum height of the pattern. As of now, that figure stands at $706. Therefore, BTC/USD is ideally looking to continue its breakout move at least until $11,282 – appears like a Long opportunity.

BTC/USD can then attempt a pullback towards $10,500 or lower.