Bitcoin and Gold were among the fewer financial assets trading in green early Wednesday.

The so-called hedging assets edged higher after the Federal Reserve Chairman Jerome Powell said that the U.S. government will need to borrow more funds to protect the economy from the coronavirus pandemic.

“While the economic response has been both timely and appropriately large, it may not be the final chapter, given that the path ahead is both highly uncertain and subject to significant downside risks,” Powell warned.

The bitcoin price closed above $9,100 briefly after testing the level $100 below for the entire Asian and European sessions Wednesday. While the asset looked choppy, its immediate response to Powell’s speech indicated that certain traders anticipated fresh upsides from an additional stimulus package. 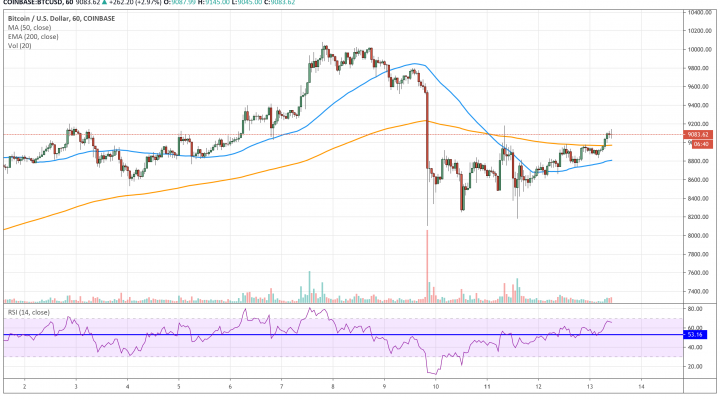 Powell reasserted that the Fed will do whatever it can to avoid a deeper crisis. He noted that the economy now needed additional policy measures – on the same day the House Democrats proposed an additional $3 trillion stimulus package.

“Additional fiscal support could be costly, but worth it if it helps avoid long-term economic damage and leaves us with a stronger recovery,” he said. “This trade-off is one for our elected representatives, who wield powers of taxation and spending.”

It is worth noting that Bitcoin’s immediate upside reaction to Powell’s comments did not guarantee an extended bullish move. The cryptocurrency is still battling a long-term Descending Channel, as FxDailyReport.com discussed here. Only once it breaks above it for a larger timeframe, it can guarantee a smooth jump towards $11,000 and beyond.

Nevertheless, the prospect of an additional stimulus package appears bullish for Bitcoin long-term. The aftermath of free money is inflation. Investors believe Bitcoin could behave as a hedge against fiat devaluations, a sentiment that even led Paul Tudor Jones, a billionaire hedge fund manager, to secure positions in the Bitcoin futures.

Photo by Alexander Schimmeck on Unsplash