The top cryptocurrency by market capitalization surged above $9,000 shortly after the S&P 500 index futures opened higher. Bloomberg reported that the U.S. benchmark jumped because of investors who expected that more economies would move ahead with easing coronavirus lockdowns.

Bitcoin’s short-term correlation with the S&P 500 helped it grow towards $9,126. The move shortly followed a small correction to the downside, reiterating traders’ inability to enter new spot long positions near $9,000. While bitcoin was sustaining above the crucial psychological support, it looked resilient enough to continue upward. 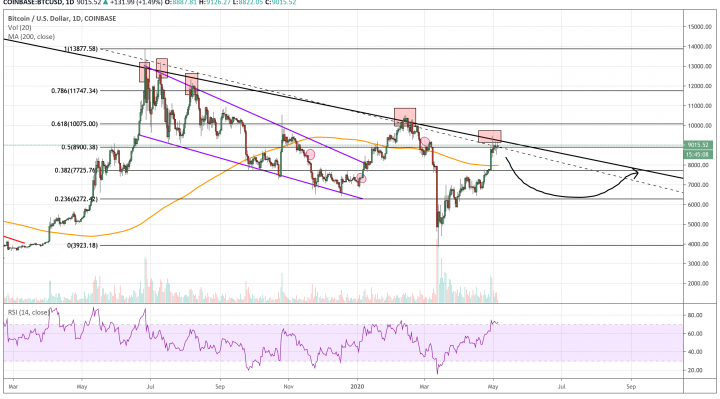 Top analysts remained optimistic about a bullish break, nevertheless. Allistaire Milne, CIO of Altana Digital Currency Fund, said Tuesday that the bitcoin market is going through a FOMO phase ahead of its mining reward halving.

The halving event would reduce the cryptocurrency’s daily minting rate from 1,800 BTC to 900 BTC. Traders think that scarcity would make it more valuable in the long-term. The sentiment is leading many to hold bitcoin, as evident by record withdrawals noted across leading crypto exchanges.

Bitcoin’s supply rate cut is arriving also ahead of turbulent times in traditional finance. While the Coronavirus pandemic has eaten up equity gains, its origin is creating a diplomatic tussle between the U.S. and China. The two countries have come closer to renew their trade war as Donald Trump and his associates accuse Beijing of keeping the world in dark about the virus.

Meanwhile, investors also fear about the second wave of infections that could deteriorate economic data, including unemployment and manufacturing index, to new lows. That could start another bear run in the traditional equity markets, impacting the S&P 500, and thus, Bitcoin.

“The market is really riding on these reopening expectations,” Jingyi Pan, IG Asia Market Strategist, said on Bloomberg TV. “Yet feedback from the economic data is unlikely to show signs of improvement at least until Q3.”