Bitcoin is Attracting Money Away From Gold, Claims Allianz Economist

The statements came as a part of a report published by Financial Times that indicated investors choosing Bitcoin over gold as a hedge against booming inflationary pressures. In detail, the biggest gold exchange-traded fund witnessed withdrawals of more than $10 billion in 2021, coinciding with a 6.1% decline in the spot gold rates. 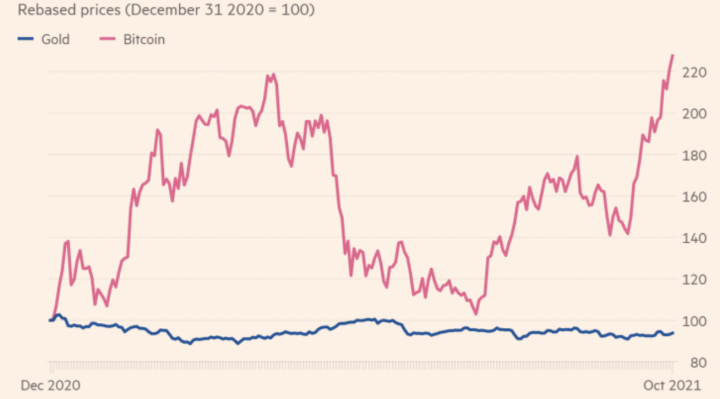 On the other hand, Bitcoin almost doubled its spot price in the same timeframe, setting up a record-high above $67,000 earlier this week. Meanwhile, the U.S.’s first-ever Bitcoin ETF debuted on Tuesday with a $1 billion worth of inflow, logging one of the best openings for an ETF ever.

“There is an inclination now to look to Bitcoin as a portfolio diversifier, with inflation being one of the catalysts,” said El-Erian, adding:

“Bitcoin has attracted money away from gold.”

Meanwhile, veteran hedge fund manager Paul Tudor Jones told CNBC that he prefers cryptocurrencies over gold as insurance against rising inflation in the U.S. A survey of 1,100 accredited investors conducted by Fidelity Investments also found that most would choose Bitcoin over the precious metal primarily due to its lack of close correlation with other asset classes.

More than half the hedge funds polled in Europe and the U.S. said that rising inflation has emerged as the main catalyst behind BTC’s investors’ demand. In detail, almost eight out of ten funds admitted that they could add cryptocurrencies to their portfolio.

Bitcoin supporters have long propagated the cryptocurrency as an ideal safety net against rising inflation. Unlike fiat currencies, which the central banks can print endlessly, BTC has a limited supply cap of 21 million tokens.

As a result, the BTC price had rallied from below $4,000 in March 2020 — the month in which the Federal Reserve announced its $120 billion a month quantitative easing program and slashed benchmark rates to near zero — to over $67,000, just as the U.S. consumer prices hovers around 5.4%. 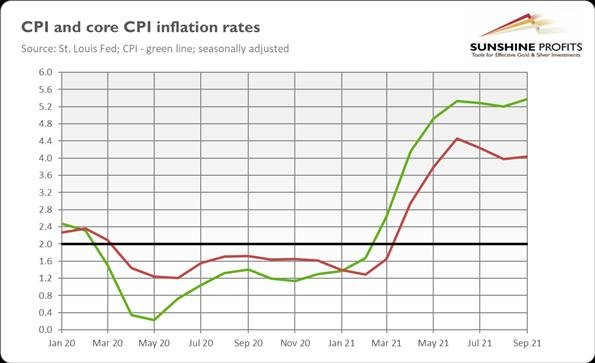 U.S. inflation over the past months. Source: Sunshine Profits

Nonetheless, investing in Bitcoin carries a much higher risk than gold. A group of researchers found the cryptocurrency to be much more volatile than the precious metal. That made BTC an unsuitable choice for institutional investors looking for stable hedging alternatives.

Cover Image: “Gold Bitcoin – Credit to http://homedust.com/” by Homedust is licensed under CC BY 2.0