Bitcoin Jumps Over $9.4K on Stock Market Optimism; What’s Next

Bitcoin jumped Wednesday after taking cues from similar bullish moves in the S&P 500.

The benchmark cryptocurrency surged by more than 2 percent to $9,475, a level it last tested two weeks ago. Earlier in the Asian session, it was trading lower – much in line with the S&P 500 futures that more first hinted a negative stock market session over the fears of rising coronavirus cases in the US.

Nevertheless, the bearish sentiment started flipping into the European session and reversed entirely after the New York opening bell. The S&P 500 rose 0.7 percent shortly after the open, while its Wall Street peers Dow Jones and Nasdaq Composite gained 1 percent and 0.7 percent, respectively.

The monthly correlation between Bitcoin and the S&P 500 also touched a record high on Wednesday, according to data provided by Skew. That allowed the cryptocurrency to move higher into the New York session – the same as the US equity benchmark. 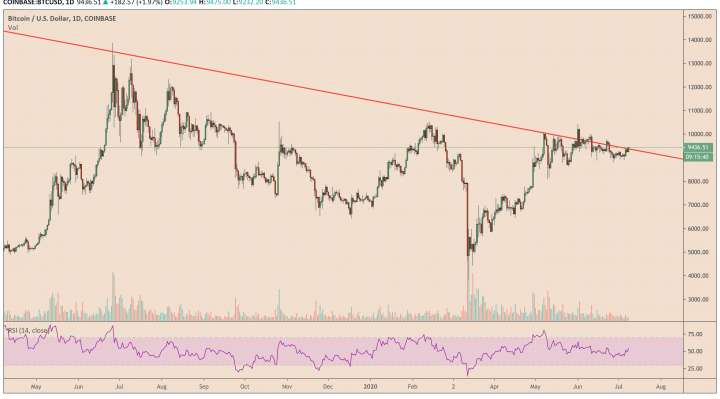 Bitcoin inches higher on Wednesday while maintaining its positive correlation with the SPX. Source: TradingView.com

The upside move also helped Bitcoin to close above a long-term Descending Trendline. While a breakout still appeared far-fetched, some analysts took the intraday gains as a sign of an honest attempt. Michaël van de Poppe, a renowned crypto trader, said shortly after the bitcoin rally:

Despite its renewed upside sentiment, Bitcoin continued to remain under the pressure of the US stock market. A rising S&P 500 looks incredible, but it lacks the concrete underlying fundamentals that a rally typically requires. For instance, stocks are rising without any corporate earnings guidance and fears of an increasing number of coronavirus infections.

“I would characterize the stock market as relatively immune to the [health] crisis,” said Gregory Perdon, the co-chief investment officer at UK-based Arbuthnot Latham & Co. He added that the market is running higher because of the Federal Reserve’s trillions of dollars worth of liquidity injections.

But the question remains: how far the Fed can artificially inflate an economy struck by record unemployment and bankruptcies? The central bank claims ‘forever.’ But the uncertainty looms, nevertheless.

A bitcoin uptrend rejection, at this point, should not surprise even the most hardcore bulls.

Photo by Max Harlynking on Unsplash