Bitcoin Loses Momentum After Rallying Towards $11,500; What’s Next

Bitcoin kicked off the new week with a bang.

The benchmark cryptocurrency rallied above $10,000-10,500, a price range that kept it from flourishing its upside trends for almost a year. On Monday, traders broke above the said area – and further extended the breakout move towards $11,333, Bitcoin’s highest level in 2020. 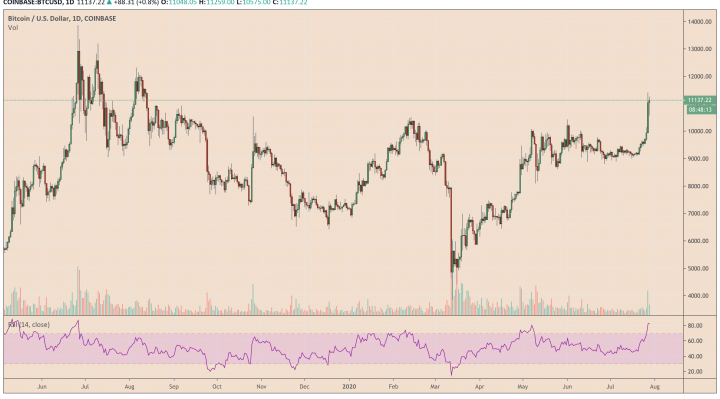 Bitcoin price closed above $11,000 for the first time since August 2019. Source: TradingView.com

But entering Tuesday, Bitcoin started losing momentum. The Asian and European session saw the cryptocurrency trading lower as traders looked to lock profits. Meanwhile, the US session held the price from falling deeper, indicating that Bitcoin may continue its upside rally after a short pause.

The sentiment remained bullish owing to the fears of economic turmoil in the US.

The country earlier this month reported a resurgence in coronavirus cases, prompting its most prosperous states to reimpose lockdown. As a result, the number of jobless claims rose, which prompted the US government and the Federal Reserve to continue their stimulus programs.

The two-day Fed meeting that concludes this Wednesday may provide more clarity on the next market direction. The market notes that the central bank would keep its interest rate near zero. On the other hand, the Senate Republicans have planned to introduce a new $1 trillion stimulus package.

Both expectations have lately impacted the US dollar and Treasury bonds. While the greenback now trades near its two-year low, the real yield on the 10-year bond has dipped into negative territory. That leaves investors with no option but to seek returns from riskier assets, such as Bitcoin.

“BTC still has a lot of retail interest in it,” Michael Novogratz, the founder & CEO of Galaxy Digital, told CNBC. “A lot of that retail interest shifted to the story stocks, to the tech stocks because they were just more fun … yesterday you saw a lot of money shift back over to gold and bitcoin.”

Technically, the BTC/USD exchange rate remains overbought, according to the readings provided by its daily Relative Strength Index. That amounts to a modest correction in the coming session.

Meanwhile, bullish calls see Bitcoin trading towards $14,000. Some projections also envision the cryptocurrency at its all-time high of $20,000 for the remainder of this year.