Bitcoin Could this be a manipulation? October 16, 2018

Bitcoin increased aggressively and it has managed to reach the 7788.0 level again after more than 2-month. It remains to see what will really happen in the upcoming period because the rate is still trapped below some very important resistance levels, so only a valid breakout it will confirm a further and a larger increase.

Price has failed once again to approach and reach the 6000 psychological level, this could be a bullish signal, but we still need to wait for a confirmation that we’ll really have an upside movement. The crypto market has recovered in yesterday’s trading session, so, if the Bitcoin will increase and it will resume the upside movement, then the altcoins will increase as well. 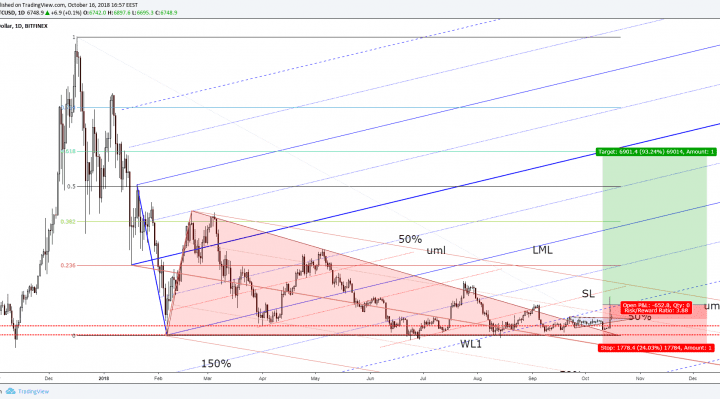 You can see that the rate has rallied after the failure to reach and retest the previous downtrend line. It has jumped much above the upside 50% Fibonacci line of the descending pitchfork, above the first warning line (WL1) of the former ascending pitchfork and above the 7000 psychological level, but unfortunately, the rate has failed to stay above these crucial levels.

Right now it seems undecided and it could drop again if it will fail to increase significantly in the upcoming days. Unfortunately, yesterday’s quick rally and retreat from the 7788 high could be considered to be a manipulation.

The rate has opened out trade setup because it has jumped above the 7401.7 level, but I want to remind you that only a valid breakout above this level, above the 50% line and above the first warning line (WL1) it will really confirm a broader upside movement. Maybe the rate will try to take these levels in the upcoming days, but you should know that another false breakout or a failure to reach them it will signal a sell-off.

A significant drop will be confirmed only if the rate will make a valid breakdown below the 6000 psychological level and most important below the median line (ml).