Bitcoin plunged on Wednesday as an increase in the coronavirus cases in the U.S. damaged investors’ risk-on sentiment.

The benchmark cryptocurrency was trading 3.11 percent lower at circa $9,324 as of 1030 EDT. Its move downhill came as a part of a broader bearish correction from its week-to-date high near $9,800, established on Monday. So it seems, traders sold the top to extract short-term profits.

The losses in the bitcoin market further appeared in sync with the ones in the U.S. stocks. The benchmark S&P 500 dived 0.7 percent after the New York opening bell on Wednesday. Meanwhile, its fellow indices, the Dow Jones Industrial Average and the Nasdaq Composite slipped 0.9 percent and 0.3 percent, respectively.

The parallel moves further attested a growing positive correlation between Bitcoin and the U.S. stocks. It somewhat posed risks for the cryptocurrency because the S&P 500 is now eyeing an extended downside correction. Part of the reason is the rising number of coronavirus cases in some of the U.S. states.

Arizona, Texas, and California on Tuesday reported a record daily spike in the coronavirus infections. That led elected representatives to plan stricter measures to contain the second potential wave of infections. Meanwhile, investors on Wall Street treated the event as a sign of another lockdown.

“If this does get worse and more endemic, they will have to lock down some of these states again,” said Charles Hepworth, an investment director at GAM Holding. He feared that another lockdown would slow down the economic activity, which, in turn, would threaten the stock market recovery.

Losses in stock portfolios in March 2020 led investors to offload their most profitable holdings to raise cash. As a result, assets like Gold, Bitcoin, and perceivably safer government bonds fell in sync. If a resurgence in coronavirus cases hurt the S&P 500, it would leave Bitcoin under similar bearish bias.

The fundamentally negative outlook for Bitcoin is also visible in its technical pattern. The cryptocurrency, so it seems, could plunge towards $9,100 in the coming sessions, a level that it had tested as support on June 19. 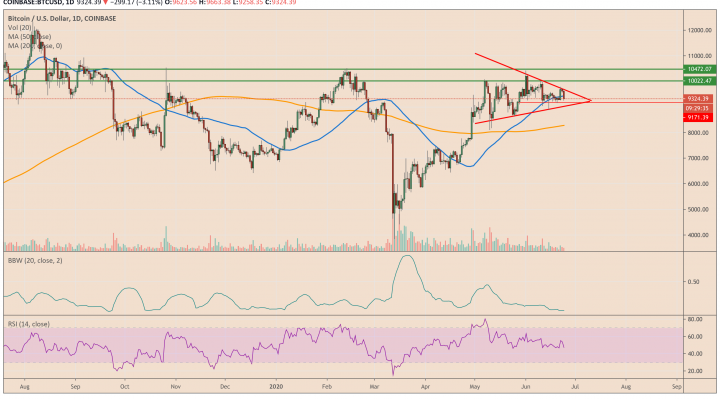 The price is fluctuating inside a Symmetrical Triangle pattern, as confirmed by two converging trendlines leaving a trail of lower highs and higher highs behind. Bitcoin lately tested the upper trendline of the Triangle and is now targeting a close towards the lower one.

Meanwhile, an interim support level near $9,200 is protecting the cryptocurrency’s bullish bias. One could, therefore, expect bitcoin to retest $9,100-$9,200 area as support. Josh Rager, a prominent cryptocurrency analyst, also sees a similar plunge but based on different technical parameters.