The flagship cryptocurrency rose by more than 3% to reach an intraday high of $57,771 a day after closing below its psychological support level of $57,000. Its move upside mirrored similar gains across the U.S. stock market indexes and Gold and inverse trends in the U.S. dollar and bond yields, showcasing a renewed investors’ appetite for riskier safe-havens. 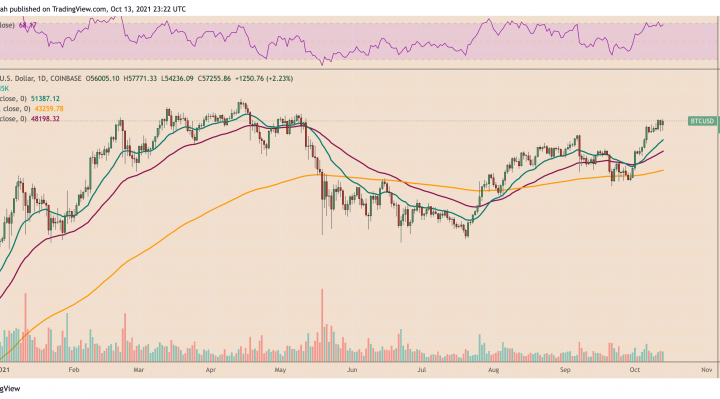 Monetary stimulus and government spending have helped Bitcoin surge from below $4,000 in March 2020 to as high as $65,000 in April 2021. But lately, concerns over the supply chain problems and rising sovereign bond yields have resulted in continuous monthly spikes in inflation.

September was no different. The U.S. Consumer Price Index (CPI) showed that inflation rose 0.4% in the month, at an annual rate of 5.4%. The readings came against economists’ expectations of a 0.3% spike from Aug 2021 and a 5.3% year-over-year rate, thus sending investors to the safety of what they assumed as hedging assets.

As a result, Bitcoin surged.

Bitcoin’s recent run-up above $57,700 also coincided with the release of the Federal Reserve’s policy meeting minutes in September. The U.S. central bank officials showed a strong consensus towards unwinding their $120 billion a month purchase of government bonds and mortgage-backed securities.

Again, the decision appeared out of concerns about persistently rising inflation, especially as Fed’s chair Jay Powell admitted that the consumer prices had surged higher against their expectations. As a result, he signaled last month that the central bank would reverse its monetary program.

Atlanta Fed President Raphael Bostic stated that the inflationary “forces are not transitory.”

“It is becoming increasingly clear that the feature of this episode that has animated price pressure—mainly the intense and widespread supply-chain disruptions—will not be brief.”

Meanwhile, the latest minutes showed that the tapering could start in mid-November, with Fed removing $15 billion worth of support every month until an entire wind-up in July 2022. That would soon follow up with decisions to raise interest rates from their current 0-0.25% range.

Institutions have prepared themselves against a potential market shock and are therefore hedging their capital into safe-havens. For example, a report from JPMorgan & Chase late last week noted that accredited investors have started choosing Bitcoin as their go-to hedging asset over the traditional precious metal, gold. Earlier this year, the banking giant had predicted the BTC price to reach $140,000 by the end of this year.

Demand against inflationary shocks also prompted other mainstream financial firms to see Bitcoin at six-digital valuations, with Fidelity Investments and Nasdaq calling for a $100,000-valuation. Meanwhile, analysts at Bloomberg projected BTC to hit $400,000.

Cover Image by Foto-Rabe from `Pixabay