Bitcoin Sells Off at $9.7K amid PayPal FOMO; What’s Next?

Bitcoin price gained towards $9,800 on Monday, but high profit-taking sentiment near the top led the price lower a day later.

The benchmark cryptocurrency was trading 0.74 percent lower at circa $9,619 ahead of the New York morning bell. The move downhill signified traders’ cautious bullish approach near or above the $9,800-level. The price has reversed its upside rallies from the said resistance area since February 2020. 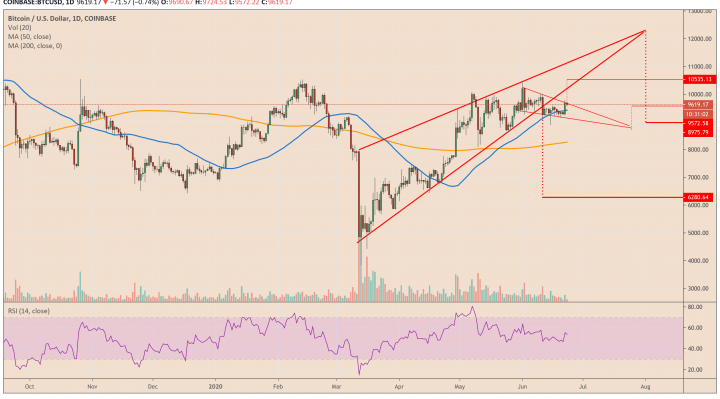 Bitcoin indicated that it might head lower following the latest correction attempt. Part of the reason is that it is trending inside a Falling Wedge. While the pattern is bullish, it has adequate room to push the bitcoin price lower – at least towards $8,600-$8,700 area. Later, the cryptocurrency could breakout to the upside with a price target sitting as far as $10,535.

Traders, meanwhile, are also finding it challenging to sustain Bitcoin’s uptrend above $10,000. It has repeatedly led the price lower towards $9,100-$9,300 area since the beginning of May 2020.

There is also a partially-filled Rising Wedge pattern that Bitcoin has broken lately, albeit weakly.

There is a higher probability of the cryptocurrency breaking out of the small Falling Wedge and reenter the Rising Wedge to target $12,000. Nevertheless, since Falling Wedges are bearish patterns, bitcoin could fall back to as low as $6,000 after breaking it to the downside.

Bitcoin’s rise on Monday partially took its cue from PayPal, a global payment giant that reportedly expressed its interest in integrating crypto services to its platform. Coindesk reported yesterday that PayPal and its arm Venmo could roll out Bitcoin buying and selling services.

“[The news] immediately broadens crypto’s potential investor base by an order of magnitude,” said data aggregator firm Messari in a client note. “PayPal has more than 300 million users worldwide. Venmo is the largest consumer finance application in the United States with over 50 million users.”

Bitcoin also hinted a continuation in upside rally because of a rising stock market. The S&P 500 index, which has formed a positive correlation with the cryptocurrency since March 2020, hinted to open higher on Tuesday, leaving Bitcoin under a similar bullish bias.