Bitcoin pulled back on Monday to trade at about $9,676 down from last week’s highs of about $9,950 in a post-halving shake off. Bitcoin had rallied to come closer to topping the $10,000 mark following last week’s halving but now appears to have shaken off most of those gains.

The price of the pioneer cryptocurrency is now pegged just below the 100-hour SMA in the 60-min chart. The 200-hour SMA is several pips down below. Bitcoin currently positioned within the mid-section of the 14-hour RSI. It also continues to trade within an ascending channel.

The price of bitcoin could be set for a major rally following a series of recent events. The US is set to follow up on the initial stimulus package of $2.2 trillion with another one of $3 trillion. This essentially means that the government will be buying more assets which in turn injects more cash to the economy. This could boost the business climate but is also unlikely to have a positive impact on the purchasing power of consumers. With more greenbacks in circulation, this should work in favor of bitcoin, as a potential store of value.

On the other hand, last week’s bitcoin halving means that the pioneer cryptocurrency is now more scarce than before. This should boost its position as a potential store of value in highly volatile markets. Traders will also be looking forward to this week’s initial jobless claims and FOMC statement on the status of the economy and monetary policy. 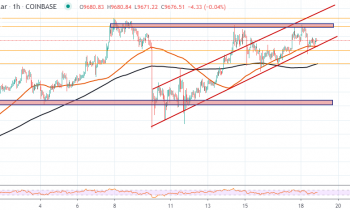 Technically, the bitcoin price appears to be pinned below the $10,000 key level by a strong resistance level. However, it still maintains a short-term bullish bias trading within an ascending channel. 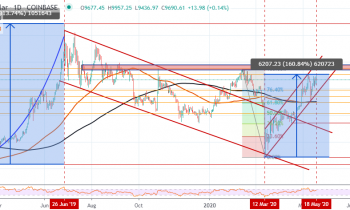 In the daily chart, bitcoin appears to be on one of its best rallies in recent years. The price of the BTC/USD is now up 160% since March 12. This is the biggest rally since last year’s Feb-June gains of 313%.  Bitcoin is now closing on the 100% Fib level against the Feb-March plunge.