The price of bitcoin (BTC/USD) has lost more than 20% of market value this week to trade at just above $8,000 after plunging on Wednesday after crypto whales moved to avoid losses amid a build-up in uncertainty in the industry.

Those woes have continued through Friday with Facebook’s Mark Zuckerberg reveals that Libra, the cryptocurrency by Facebook continues to face challenges.

As such, it would appear that even as bitcoin price dropped to trade below $8,000 momentarily before bouncing back to settle at $,8,017, more downward movements could be on the way.

From a fundamental perspective, the price of bitcoin is trading at the back of a volatile week that has been characterized by chaotic cryptocurrency trading amid selling pressure. Bitcoin price relies a lot on the general sentiment toward cryptocurrencies and this week, there has been a lot of negative sentiment that culminated with Zuckerberg’s comment on Libra’s outlook.

From a general economic point of view, the latest round of economic data from around the world has been mixed with no particular bias (positive/negative) thereby having minimal impact on cryptocurrency prices. 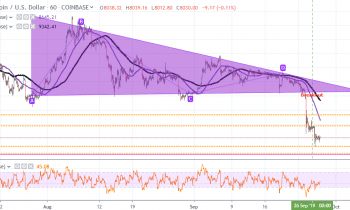 From a technical viewpoint, the price of bitcoin appears to have recently made a bearish breakout after completing a consolidative triangle formation. This breakout came following a major plunge in the price fo bitcoin in mid-week, which also pushed the BTC/USD to oversold levels of the RSI indicator. The price of bitcoin has since made a slight recovery to trade above $8,000 but it remains to be seen how strong the upward momentum is going into next week. 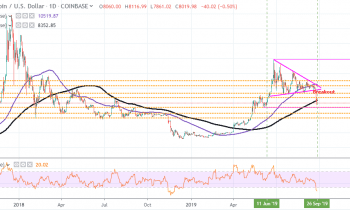 In the daily chart, the price of the pioneer cryp[tocurrency appears to have recently made a bearish breakout off a consolidative symmetrical triangle. It is currently pegged just below the 200-day MA and significantly below the 100-day counterpart. This indicates that if the BTC/USD does not find strong support at the current level, it could fall even further due to the bearish pressure.

In summary, the price of bitcoin appears to have made a major breakout both in the short-term and the long-term, this sets it up for interesting trading sessions in the next few weeks.