Bitcoin price continues to trade lower against the dollar as it moves inside a descending channel on its 1-hour chart. Price is testing the resistance and could be due for a selloff towards support around $600 soon.

Bearish pressure is still in play after Chinese government authorities proceeded to crack down on bitcoin exchanges and investors, warning that it is not currency and shouldn’t be treated as such. They also reminded exchanges to implement anti-money laundering procedures and know-your-customer checks even for bitcoin holders. These are in line with their move to limit offshore investment and to prevent investors from hedging their yuan-denominated holdings. 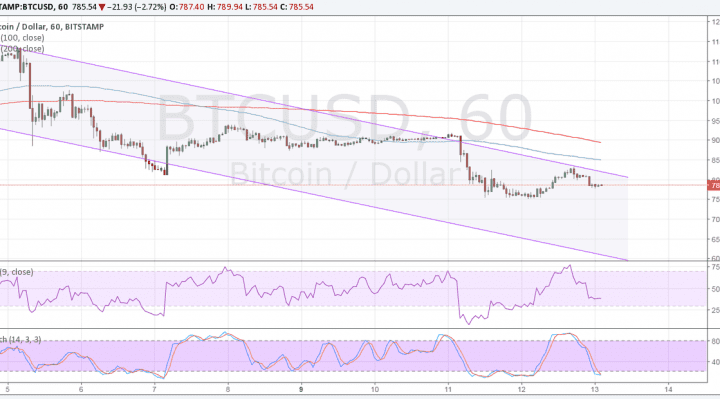 The 100 simple moving average (SMA) is below the longer-term 200 SMA on the 1-hour chart, which basically means that the downtrend is more likely to carry on than to reverse. In other words, bitcoin is likely to head south from this channel resistance rather than head higher.

RSI is heading lower on this time frame, reflecting a pickup in selling momentum. Stochastic is also on the way down but the oscillator is already dipping into the oversold region, which indicates that sellers are getting exhausted and that buyers could take over soon. A move past the latest highs at $830 could be an early signal for an upside breakout and potential climb.

Zooming out to the longer-term time frames of bitcoin such as the daily chart reveals that the uptrend is very much intact. In fact, price has yet to test the rising trend line support connecting the lows since November 2015. This lines up with the 100 SMA dynamic support and the 61.8% Fibonacci retracement level. It also coincides with a former resistance level around $600 so this area of interest could keep losses in check for the time being.

It may take some time before bitcoin bulls charge again as traders are extremely wary of what restrictions the Chinese government could impose. Although experts have mentioned that it’s nearly impossible to crack the anonymity of bitcoin transactions due to the nature of the blockchain and how buying and selling activity is logged, traders still can’t help but worry that an all-out ban is possible if exchanges and traders don’t show signs of reining in their activity. Keep in mind that China is bitcoin’s largest market so a slump in volumes in this country could force bitcoin back to its record lows.

Outside of China, geopolitical uncertainties still render bitcoin a good investment alternative to traditional financial assets which are currently vulnerable to themes such as the Trump presidency and Brexit negotiations. Should these risks rise, investors from other parts of the globe could also flock to bitcoin to seek higher returns compared to stocks or currencies.

Meanwhile, the US dollar also enjoys a bit of support for the time being as traders believe that the Fed can stick with its timeline of hiking interest rates three times this year. Further upside surprises in data could reinforce this view and the promise of fiscal policy reform from the incoming administration could shore up the economy’s potential.