Bitcoin (BTC) has the potential to hit $100,000 in the coming weeks, said Crypto Birb in a tweet published Monday.

The statement appeared as the BTC price rose 1.68% to hit an intraday high above $66,300. Meanwhile, the gains surfaced as traders flocked to the safety of perceived hedging assets, on concerns that the inflation in the U.S. is not transitory as suggested by the Federal Reserve in recent months.

A minor correction ensued as Bitcoin crossed above $66,000, signaling an interim selling pressure near the level. Nonetheless, traders held onto $65,000 throughout Asia and the European trading hours, thus keeping Bitcoin from pursuing an extended downside correction towards the next support level at $60,000.

But to Crypto Birb, even a fall below $50,000 would not deter Bitcoin bulls from pursuing $100,000 as their ultimate price target. The independent market analyst shared a setup that presented Bitcoin’s 50-day moving average as a solid support level, ensuring a strong BTC rebound towards the six-figure valuation.

“My BTC targets are set,” he wrote. “[I am] expecting Bitcoin to trade near $100k in next weeks. And yes, I’m serious. What we’re about to witness will change many lives forever.” 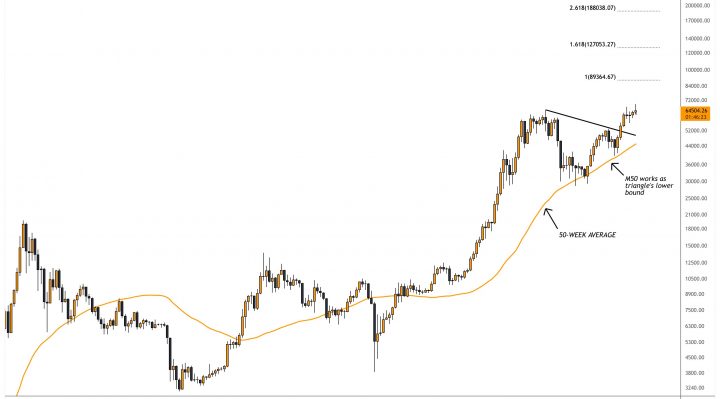 The gains appeared as the CPI surged a seasonally adjusted 0.9% in October from the previous month. That marked a sharp acceleration from September’s 0.4% spike but coming the same as June’s 0.9%. Overall, the core price index increased to 4.6%, the highest level in more than three decades.

“We’re really seeing investors say, ‘Well, this inflation could be a little more sticky, so we do need to add precious metals,'” said Chris Gaffney, president of world markets at TIAA Bank. He recommended his clients to increase their gold holdings, thereby hinting that Bitcoin, a safe-haven competitor to gold, may also see higher allocations across traditional investment portfolios.

“Our model shows that for Bitcoin, the importance of inflation and hedging against uncertainty become more important drivers over time,” said Bloomberg economists Björn van Roye and Tom Orlik, adding that they now account “for 50% of price moves in the latest cycle relative to 20% in 2017.”