The Brazilian real is weakening against many major currency rivals to kick off the trading week. The real, which had been rebounding in recent weeks after crashing to an all-time low, is slumping on disappointing economic data and the huge jump in coronavirus cases that are engulfing the country. Will May’s rebound continue into June? Or is the real set to fall again?

According to official government statistics, the national economy shrank 1.5% in the first three months of 2020, down from a revised 0.4% jump in the fourth quarter of 2019. The market had anticipated a drop of about 1.5%, which is the first contraction since 2016 and the biggest decline since early 2015. The entire economy witnessed significant slumps, including finance, mining, manufacturing, construction, and public administration.

On Monday, the IHS Markit manufacturing purchasing managers’ index (PMI) came in at 38.3 in May, up from a record low of 36 in April. The median estimate was 33.

Later this week, industrial production, services and composite PMI, and automobile production data will be published. 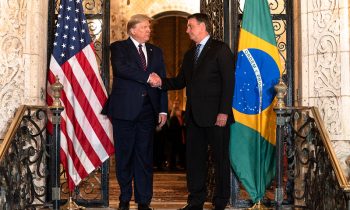 But investors are concentrating mostly on the public health crisis unfolding in the South American country. Brazil is experiencing tens of thousands of confirmed cases per day, and the total recently topped 515,000 infections. The nation has nearly 30,000 COVID-19 deaths. The situation has become so bad that the US government imposed a travel ban on Brazil.

Although many cities and states have implemented strict lockdown measures in recent weeks, President Jair Bolsonaro has urged the country to reopen, despite the shockingly high coronavirus numbers. On Sunday, he also attended a rally on a horse and encouraged the Supreme Court to end a shut down of an investigation into him.

Bolsonaro has been slammed at home and abroad for his administration’s failed actions on grappling with the highly-infectious respiratory illness, but the president has blamed the press, health officials, and even members of his cabinet for making the problem appear a lot worse. He believes the longer the emerging market is in lockdown, the worse it is for the economy.