BTC/USD (Bitcoin) Targets a Retest of Weekly Highs After Rebound

The price of Bitcoin (BTC/USD) continues to face strong resistance around the $10,700 level and in recent trading sessions, it has pushed below $10,400. The pioneer cryptocurrency is now trading within a diving channel after completing the second breakout in the space of seven days.

Bitcoin entered the previous bullish wedge before breaking out in a bearish slump late last week. And now, it appears to have taken a bearish outlook in the short-term horizon with potential support found at around $9,882.

From a fundamental perspective, the price of bitcoin has rallied this month primarily following the softening of Trump’s stance on trade tariffs. The decline since last week has been driven by a series of disappointing economic figures led by the non-farm payrolls, which missed expectations with 130k jobs.

And in Europe, there is some light at the end of the tunnel for those against a hard Brexit and this is promising for the Uk economy. The Pound Sterling has certainly ridden on this renewed market optimism and overall, it gives all traders including those trading in bitcoin a reason to look forward with some bullish expectations. 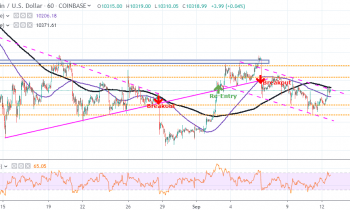 Technically, the price of bitcoin appears to have recently touched the overbought levels of the Relative Strength Index Indicator. It has since pulled back depicted with the BTC/USD finding strong trendline resistance that looks et to trigger a pullback.

Therefore, going into Friday, the bears will be targeting short-term profits at the next immediate support level at $10,059 or lower at the trendline support at $9,882. On the other hand, the bulls will hope that the current recovery continues towards the current weekly highs of about $10,555 or higher at around $10,761. 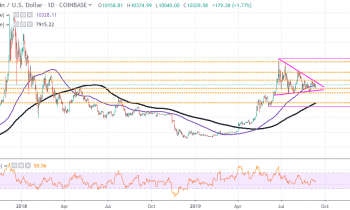 In the daily chart, the price of bitcoin appears to be trading in a consolidative triangle formation, which suggests that it could soon experience a major breakout. And judging by the formation of the triangle, the bears appear to be winning the battle, which could push bitcoin into a bearish breakout.

In summary, the price of bitcoin appears to be trading under significant bearish pressure in the short-term, but in the long-term, both the bulls and the bears appear to be evenly matched amid a consolidative triangle formation.