BTC/USD Looking for a Retest of $4,000 After Pullback

The price of bitcoin BTC/USD has resumed to the initial trend following the plunge at the start of the week. The corrective move, which occurred on March 5, 2019, after the massive decline in the previous day to the price of the pioneer cryptocurrency back to the bearish sloping channel, which effectively began late last month.

The price of bitcoin is largely affected by market sentiment towards cryptocurrencies, while a bearish outlook in the global financial markets also weighs in. Over the last 12-15 months, cryptocurrency prices have crumbled particularly because of a corrective move following the bullish rally in 2017, and the significantly bearish stock market.

Cryptocurrencies are risky investments and when the general market risk is high, investors tend to move their investments to safer instruments like fixed income and REITs. And while stocks have recovered significantly over the last two months or so, since the October-December 2018 plunge, cryptocurrencies have not lived up to this recovery trend mainly because, again, stocks are less risky than cryptocurrencies. As such, the price of bitcoin has recovered at a slower rate 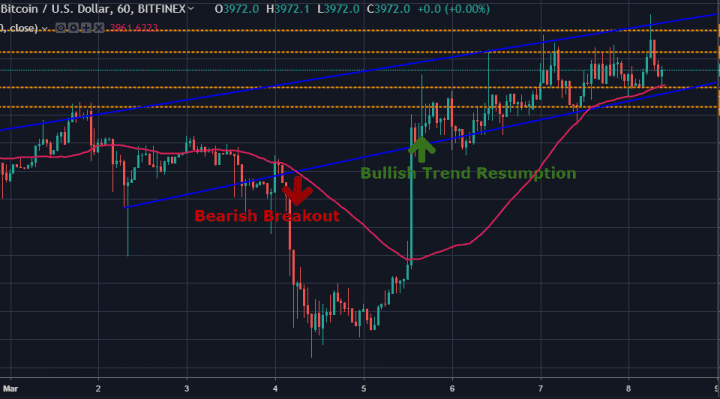 From a technical perspective, the price of bitcoin BTC/USD appears to have recently resumed to the initial bullish sloping trend following the plunge earlier in the week, as demonstrated using the 60-min chart above.

The BTC/USD is currently trading just above the 50-period moving average line, which is providing crucial support as the week comes to an end. It now seems set for a move back top, which could signal a retest of the $4,000 price level. As such, the bulls will be targeting for profits at $4,000 level, while the bears will hope for a breach of the 50-period moving average support, which will trigger opportunities at around $3,960 price level in the short-term. 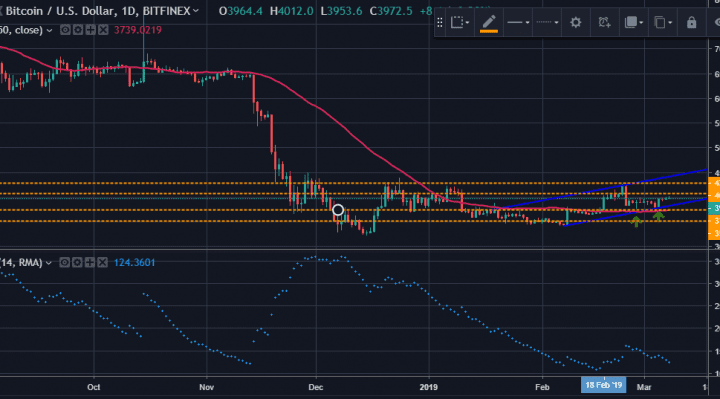 On the daily chart, the BTC/USD pair appears to have been trading within a sideways range since December 2018. However, that range has recently begun to incline upwards, suggesting a potential creation of a new trend. Volatility, as demonstrated using the Average True Range indicator down below, has also cooled down, which indicates that the next move could be up.

In summary, the price of bitcoin BTC/USD looks to have found its bottom around the $3,800 price level and now looks to be enjoying key support in the form of the 50-period moving average. The bulls will be excited by this going into next week.