Crude oil futures rose modestly to close out the trading week, but the tepid gain was not enough to stop prices from suffering a small monthly loss. As global crude supplies and economic uncertainty continue to weigh on the market, will oil prices continue to trade in the $40 range in August?

Brent, the international benchmark for oil prices, ended the trading week lower. October Brent crude futures dipped $0.07, or 0.16%, to $43.45 a barrel on London’s ICE Futures exchange. Brent prices squeaked out a weekly gain of 0.1% and posted a 1.6% monthly jump in July. So far this year, Brent is also down about 34%.

According to Baker Hughes, crude oil rigs in the US fell to 180 in the week ending July 31, down from 181 in the previous week. The total rig count was unchanged at 251. Analysts are concerned about the sluggish trend since June as the numbers are only coming down slightly. Before the COVID-19 public health crisis, the number of oil rigs was about 700.

It is believed that since prices are in break-even territory, and perhaps in profitable terrain for many oil and gas firms, producers will restart operations and begin to drill even more. With the Organization of the Petroleum Exporting Countries (OPEC) and its allies – OPEC+ – tapering their production cuts as of Sunday, the market will begin to see an increase in supplies, which would put a lid on rising crude prices. 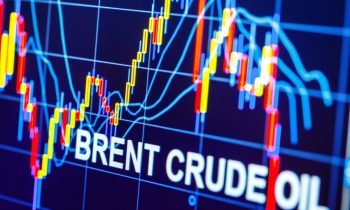 This could spell bad news if global demand sputters and the economic recovery fails.

Oil prices have found support in a sliding greenback as the US Dollar Index tests 93.00. The buck has shed 6% over the last three months, bringing its year-to-date loss to a little more than 3%.