The Dow Jones industrial average climbed to the 6-week high to trade at 27,005 as the second quarter USA corporate earnings largely beat the market forecasts. As of now, the earnings session seems to have done pretty well with over 80% of its major companies announcing much better results.

On the other hand, Tesla smashed earnings that were expected across different markets, with the generated revenue being $6.04b vs. the estimated $5.40billion, free cash flow at about $418 million vs. the predicted losses of about $616millon. On the other hand, the millions per share clocked in at about 50 cents against the projected losses of about $2.31. This is the 4th consecutive profitable aspect that paves way for the car company to join their S&P 500 peers. The share price further advanced about 4% in the after-hours trading to about $1,657. 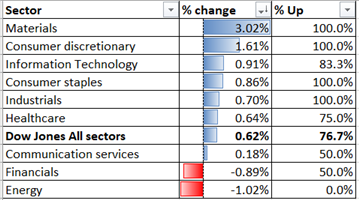 Technically speaking the Dow Jones Index is currently riding on the ascending trend and moving much higher. The immediate support level might be found at about 26,300 – 20-day SMA (Simple Moving Average) and then the 26,000, 50-D SMA. The immediate key resistance might be found at about 27,400, a previous high that was found in June. The break out over 27,400 will most likely create more room for an additional uptrend to 27,900 Fibonacci (161.8% extension).

The Hang Seng Index fell further on Wednesday after the USA ordered the closure of China’s Houston embassy. This marked the abrupt escalation of the china-us tensions that have been already on a deteriorating path over the past few months due to the coronavirus crisis and the newly passed Hong Kong Security Law.

Nevertheless, the chances for such an event to grow into a huge diplomatic crisis remains low at the moment. This was shown by the strong USA trading session and fall into the volatility index. As it is right now, the Hang Seng might try to climb high again after the news is absorbed by the market.

Basically, this index has found some great support at about 25,000 Fibonacci (50% retracement). Breaking under critical support can result in an additional downside to 24,100 (38.2% retracement).

The offshore Chinese Yuan fell further yesterday after the closure of the Chinese embassy in Houston. Technically, the currency hasn’t fallen off the cliff, and it even strengthened further to 7.009 against the greenback from the previous high, which was 7.020 this morning. This clearly shows that the market is not largely concerned about the headlines. Keep reading The New Zealand Favorable Events Kept it Strong Against The American Dollar.