It is the best time for investors to drop the stocks of Grayscale Bitcoin Trust (GBTC) before it brings more losses, according to Peter Schiff of Euro Pacific Capital.

The chief executive officer on Wednesday said that GBTC had lost about 40 percent of its value since June 26. On the other hand, Gold has climbed almost 7 percent within the same time. Schiff noted that investing in a traditionally perceived safe-haven asset such as Gold is better for investors looking for higher yields against lower investment risks.

Since June 26th anyone who followed @barrysilbert‘s advice to go digital by dropping gold and buying GBTC has not only missed a 7% gain in the price of #gold, but suffered a 40% loss on the price of GBTC. Drop GBTC and buy gold before the loss on this trade gets much larger!

The comments followed a high-profile anti-gold campaign launched by Grayscale Investments, LLC, a New York-based cryptocurrency investment and asset management firm. The firm asked investors to “Drop the Gold,” and instead choose Bitcoin while portraying the yellow metal as a bulkier, non-transferrable object. The ad campaign received accolades from staunch bitcoin followers, who believe the cryptocurrency is a better alternative to Gold, given its digital persona – a string of mathematically-made codes that can be carried or transferred to anywhere

Nevertheless, Bitcoin is more volatile than Gold. The cryptocurrency has a history of moving as much as 20 percent up or down in a day, which makes it a poor store of value. Critics like Schiff are, therefore, against the idea of bitcoin-is-better-than-gold narrative. On the other hand, supporters like Barry Silbert, the head of Greyscale, believe investors, in the long term, would choose bitcoin over gold.

The value of Bitcoin also backs Silbert’s GBTC stock. It is a traditional investment vehicle which allows institutional investors to speculate on the cryptocurrency’s price. More recently, the bitcoin price has been trending downwards – it has fallen from circa $14,000 to as low as $8,160. That has also brought GBTC down.

But, on a year-to-date timeframe, GBTC is still 118 percent up. Gold, at the same time, is up slightly more than 17 percent. 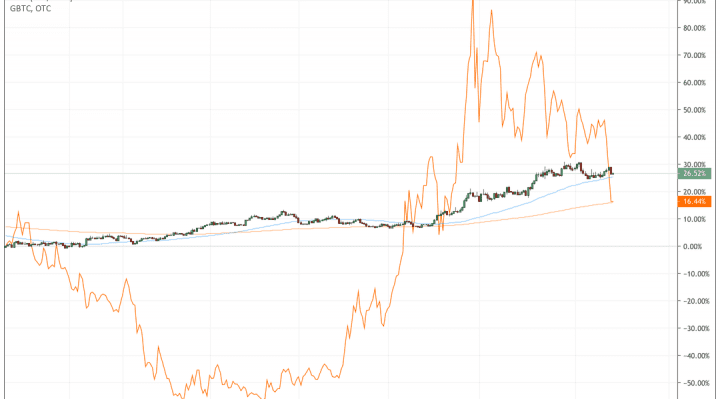 “How about a standardized performance table with 1,3,5 and 10-year returns and a 10y calendar-year returns table to make it a fair comparison between bitcoin and gold?”