Earnings stock to watch: Everest Re Group Ltd (NYSE: RE)

Everest Re Group Ltd (NYSE: RE) stock rose over 0.14% on 11th Feb, 2020 (as of 10:19 am GMT-5 ; Source: Google finance)  after the company posted better than expected results for the fourth quarter of FY 19. The company has reported fourth-quarter net income of $217.6 million, up from a loss of $385.3 million, for the year earlier. Gross written premiums were up 7% in the fourth quarter to $2.4 billion. Reinsurance premiums, excluding the impact of reinstatement premiums, grew 4%, mainly on the back of the growth in treaty casualty. Insurance premiums had risen 30% to $758.7 million, with balanced growth being generated across all major business lines. Catastrophe losses, after of reinsurance and reinstatement premiums, had totaled $215 million, and were mainly related to losses from Japanese Typhoon Hagibis in the amount of $190 million and Tornadoes in Dallas, Texas in the amount of $25 million. The company has generated cash flow from operations of $1.9 billion for the full year 2019, compared to $610.1 million for 2018. Excluding catastrophe losses, reinstatement premiums and the favorable prior period loss development, the attritional combined ratio was 90.3% for the fourth quarter 2019, compared to 90.4% for the fourth quarter of 2018. For the full year 2019, Everest has posted net income of over $1 billion. On ROE basis, this equates to a 12% return on average equity. 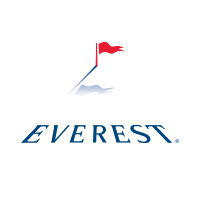 Additionally, during 2019, the Company had repurchased 114,633 shares at a total cost of $24.6 million. The repurchases were made according to a share repurchase authorization, provided by the Company’s Board of Directors, under which there remains 1.3 million shares available.