The EUR/CHF currency pair has bounced off after shedding most of the weekly gains on Wednesday an Thursday. The pair found strong support around 1.1200 level, which also happens to coincide with the current level of the 200-hour moving average.

The Euro had shown a significant degree of strength against the Swiss Franc since the start of the month as it attempts t recoup some of the losses incurred during the second half of May. The currency pair is currently enjoying a short-term bullish bias but the recent pullback has trimmed most of the gains.

The EUR/CHF currency pair is trading at the back of the Swiss National Bank (SNB) statement, which held the current monetary policy unchanged on Thursday. The SNB also emphasized on the need to not overdramatize small changes in inflation expectations as it continues to paint that picture of caution into the second half of 2019.

On the other hand, with the European Central Bank (ECB) holding rates constant early this month, it is clear that no major movement in the pair can be expected in the near future. Sideways trading could persist through next week. 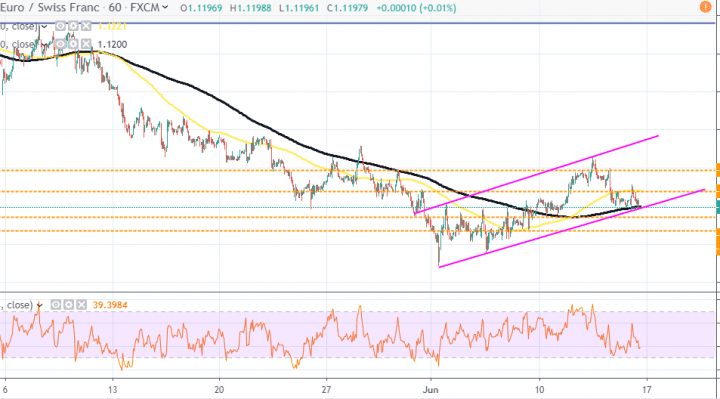 From a technical perspective, the EUR/CHF currency pair appears to be trading just above the 200-hour moving average line. The pair is pegged within an ascending channel dating back to the start of this month. This suggests a short-term bullish bias.

In the daily chart, the EUR/CHF currency pair appears to be trading at the back of a head-and-shoulders reversal pattern. The pair has traded within a sideways channel since the reversal 10 months ago.

The current position of the pair sets it perfectly for a major rebound as it trades off the support level around 1.1200. The bulls will be optimistic going into next week while the bears will be eyeing a breach of the current support.

In summary, the EUR/CHF currency pair appears to enjoy a short-term bullish bias following the recent pullback. However, the bears will look to pounce on any breaches down to the south.