The EUR/CHF currency pair on Thursday plunged to trade at around 1.0799. This came after it found strong resistance around the 100-hour SMA. The currency pair had earlier rallied to top 1.0832 but eased off late on to trade closer to the current weekly lows.

The pair continues to trade in a descending channel, which indicates a short-term bearish bias in the market sentiment. Nonetheless, it appears that there is still room to run lower before hitting the oversold zone of the RSI indicator in the 60-min chart.

From a fundamental perspective, the EUR/CHF currency pair is trading at the back of a relatively busy period in the EU market compared to the previous week. In November, German exports posted (MoM) decline of 2.3%, which was worse than the expected decline of 0.5%. On the other hand, the seasonally adjusted trade balance for the same period came short of expectations with EUR 18.3 billion versus EUR 20 billion.

However, the non-seasonally adjusted current account balance beat EUR 16.9B with EUR24.9B. Industrial production also impressed by beating the s.a (MoM) expectation of 0.7% with 1.1%. Also, the non-seasonally adjusted industrial production beat the (YoY) expectation of -3.8% with -2.6%. Imports for November, on the other hand, missed the expected (MoM) change of 0.2% with -0.5%.

In Switzerland, retail Sales for November missed the expected (YoY) change of 0.4% with 0.0%. Also, the SNB’s foreign currency reserves for December edged lower to 771 billion down from 783 billion in the previous period. 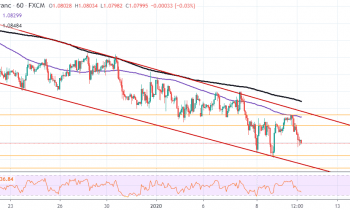 Technically, the EUR/CHF currency pair appears to be trading in a descending channel, which shows that there is a short-term bearish bias in the market sentiment. The pair has recently bounced off the 100-hour SMA up top which triggered the latest pullback. 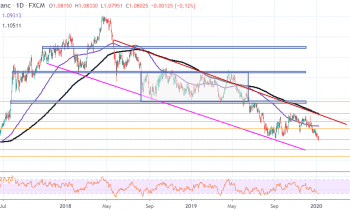 In the daily chart, the EUR/CHF currency pair also appears to be trading under considerable bearish pressure in a descending channel. The pair has recently dropped below the 100-day SMA while the 200-day SMA is located several pips higher. This confirmed that the bears retain control in the long-term.