The EUR/CHF currency pair on Thursday plunged to a new 3-year low of about 1.0620 after speculation continued about a potential ECB stimulus. The currency pair has been on a downward movement since the start of the week and this looks set to continue through Friday.

The pair also made an attempt to recoup some of the losses but failed to gather momentum at midday. Nonetheless, this helped it climb off the oversold levels of the RSI indicator in the 60-min chart.

From a fundamental perspective, the EUR/CHF currency pair is trading at the back of some key developments in the EU. There is continued speculation that the ECB could roll out another round of quantitative easing in a bid to stimulate the economy. This has caused concerns thereby leading to a weakening of the Euro. In addition, the coronavirus continues to take its toll after China indicated that a significant number of new cases had been diagnosed.

In the latest round of economic data, the Swiss unemployment rate for January was in line with the (MoM) expectation of 2.3%. The Consumer Price Index also met the (YoY) and (MoM) expectations of 0.2% and -0.2%, respectively. Traders will be watching Friday’s Producer and Import Prices expected early in the morning.

In the EU, the Industrial Production for December missed the (YoY) and (MoM) expectations of -2.3% w.d.a, and -1.6% s.a, with -4.1% and -2.1%, respectively. Traders will be looking forward to tomorrow’s preliminary Q4 GDP and Trade balance for December. On Thursday, Germany’s Harmonized Index of Consumer Prices for January was in line with the (YoY) expectation of 1.6%. 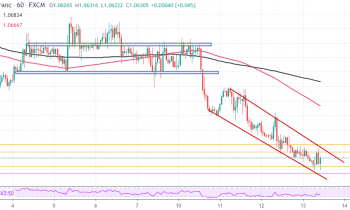 Technically, the EUR/CHF currency pair appears to be trading within a sharply descending chart amid increased selling pressure. This indicates that the market is experiencing a short-term bearish bias. Today’s unsuccessful rebound means that the bears retain control. 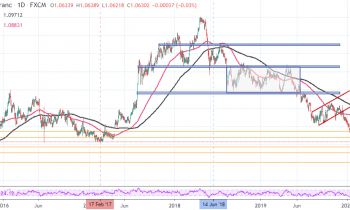 In the daily chart, the EUR/CHF currency pair appears to have recently made a bearish breakout off an ascending channel. This indicates an attempt by the bears to retake control of the pair. The bulls had tried to initiate a reversal following the decline from the mid-last year.