The EUR/USD currency pair appears to be finding strong resistance around the current 3-week highs of 1.1090 after bottoming at a new 7-week low of about 1.0980. This week, the currency pair has extended gains to flirt with 1.1000 but appears o be lacking the momentum to take beyond this key level.

The pair hit overbought levels on Monday but has since pulled back to trade within the normal trading zone of the RSI indicator in the 60-min chart.

From a fundamental perspective, the EUR/USD currency pair is trading at the back of a relatively active period in both the EU and the US economies. Yesterday saw a late plunge in the US stock prices with all the leading Indices closing lower after President Trump hinted on Twitter that trade talks with China could drag until after the next presidential elections.

In terms of economic data, traders are looking forward to the US non-farm payrolls coming up this Friday. This week we have also seen a series of economic data released including the US ISM Manufacturing PMI which missed the expectation of 49.2 with 48.1. The Change in Construction Spending for October also missed the (MoM0 estimate of 0.4% with -0.8% while ISM Prices paid came short of the expected reading of 47 with 46.7.

On the other hand, in the EU, the Markit Manufacturing PMI for November beat the expectation of 46.6 with 46.9 followings in the footsteps of the Italian, Spanish, French, and German PMIs, which also outperformed expectations. 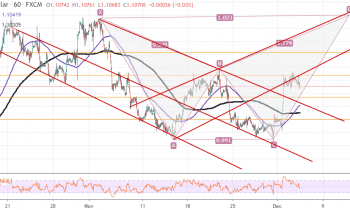 Therefore, the bulls will be targeting short-term profits at around 1.1087 or higher at 1.1122. On the other hand, the bears will hope for an immediate pullback towards 1.1054 or lower at 1.1020 going into the tail-end of the week. 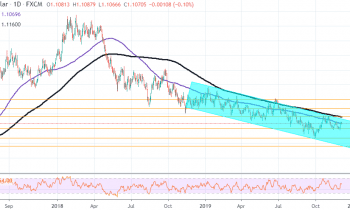 In the daily chart, the EUR/USD currency pair appears to be trading under considerable bearish pressure even though the bulls are trying to turn the tables right at the end of that descending channel. The pair is facing strong trendline resistance from the 100-day SMA while the 200-Day SMA is a few pips higher.