EURAUD has formed higher lows and higher highs inside an ascending channel on its daily time frame and is currently bouncing off the resistance. A pullback might follow from here before buyers allow the uptrend to resume.

The 100 SMA is above the longer-term 200 SMA to indicate that the path of least resistance is to the upside. In other words, the climb is more likely to gain traction than to reverse. In that case, EURAUD might recover to the swing high around the 1.6800 handle or higher from here.

However, RSI is still pointing down to indicate that the correction could carry on and that bearish momentum might persist. Stochastic is also pointing lower to show that bearish pressure is in play and could stay on before oversold conditions are seen. 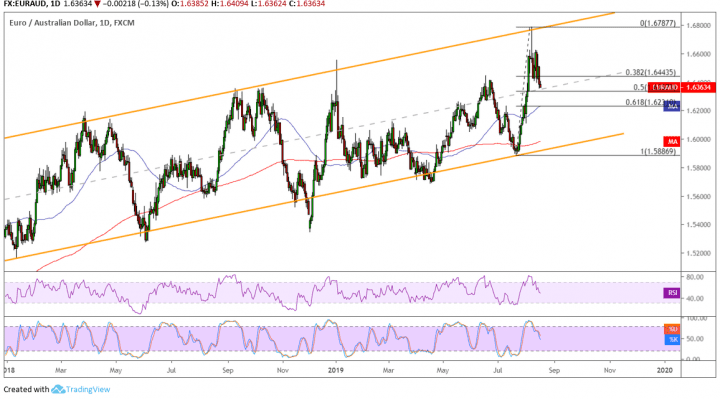 Economic data from Australia turned out stronger than expected as the economy added 41.1K jobs in July versus the projected 14.2K gain. However, the earlier reading was downgraded from +0.5K to -2.3K. The jobless rate was unchanged at 5.2% as expected.

Meanwhile, the German GDP report released in the previous day turned out as expected with a 0.1% contraction. Prior to this, the ZEW economic sentiment report for the region’s top economy also came in disappointing with a drop from -24.5 to -44.1 versus the consensus at -27.8.

Next week, flash PMI readings from the euro zone are due and these would provide clues on whether or not the slowdown might persist. Also, the ECB meeting minutes are up for release and these might also have hints on what policymakers might do next.