EURCAD has been trading inside a range with support around 1.5075 and resistance at 1.5300. Price recently bounced upon hitting the resistance and is now closing in on support.

A bounce could take it back to the range top while a break lower could set off a slide that’s at least the same height as the chart formation. The 100 SMA is below the 200 SMA to hint that the path of least resistance is to the downside or that support is more likely to break than to hold. If that happens, a selloff that’s the same height as the range or around 200 pips could follow.

RSI is pulling up without even hitting oversold territory, indicating that buyers might be eager to return from here. Stochastic is nearing the oversold region and also looks ready to turn higher, so bullish momentum could pick up. 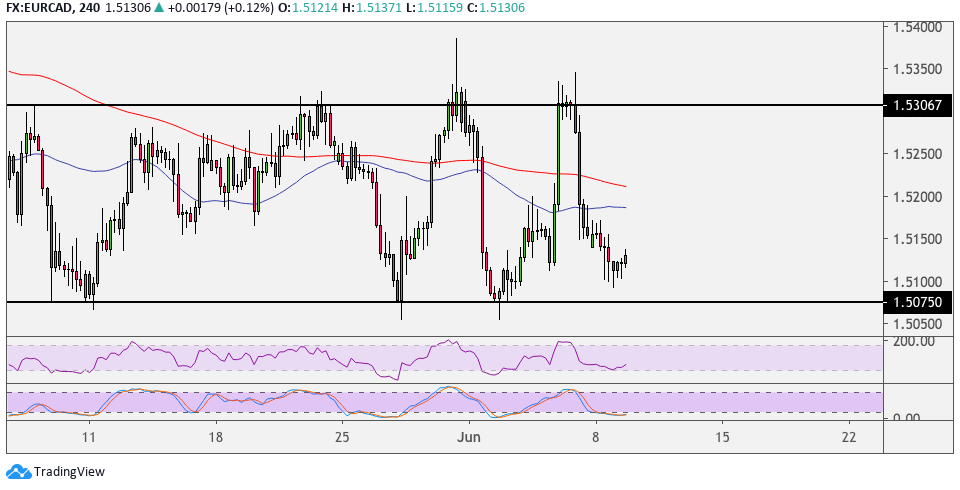 There are no major reports due from the euro zone in the next session, although the shared currency has been able to draw strong support from additional stimulus from the ECB and German government.

Meanwhile, the Loonie also got a boost from crude oil rallies stemming from the OPEC decision to expand output cuts. Economic data from Canada has also been stronger than expected as the country added 300K jobs versus the projected reduction of 500K in employment and the earlier 1.993M drop in hiring.

Risk appetite has also been in play as more economies have been reopening, although the WHO’s warning that the pandemic is far from over could keep risk rallies in check. There are no other major reports due from both economies for the rest of the week, so market sentiment could be the main driving factor. More stimulus efforts from governments could keep risk rallies in play, which would be bullish for the Canadian dollar.