EURGBP has formed higher lows connected by a rising trend line on its 1-hour chart. Price is pulling back to this support level, which happens to line up with several inflection points.

Price is currently testing the 50% Fibonacci retracement level around the .8950 minor psychological mark and the 100 SMA dynamic inflection point. This also coincides with an area of interest or a former resistance level that might hold as support.

If so, EURGBP could recover to the swing high near the .9000 major psychological mark or higher. A larger pullback could test support at the 61.8% Fib, but a break below this could signal that a reversal is taking hold.

The 100 SMA is above the longer-term 200 SMA to indicate that the path of least resistance is to the upside or that support levels are more likely to hold than to break. The gap between the indicators is wide enough to suggest that there’s no looming crossover just yet.

RSI is treading close to the oversold region to signal that sellers could be exhausted soon and possibly allow buyers to take over. Stochastic is also indicating oversold conditions, and turning higher could confirm that bullish momentum is picking up. 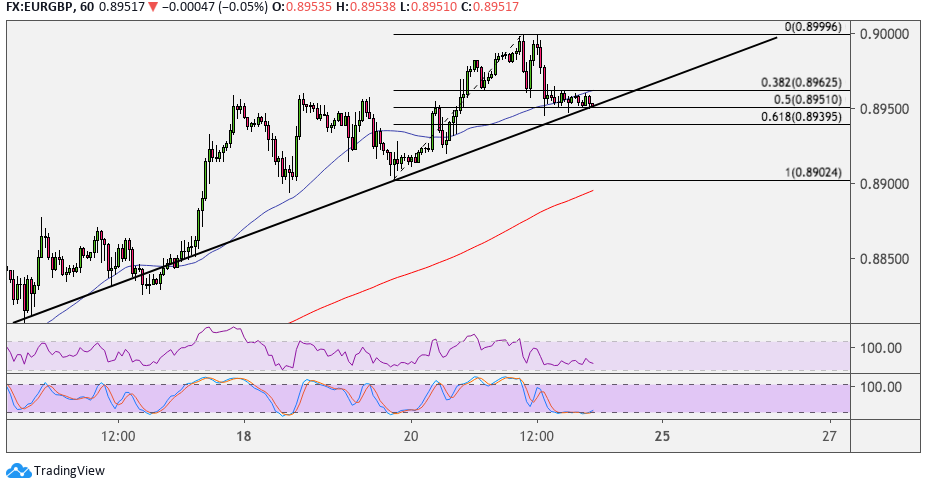 Euro zone PMI readings turned out mostly stronger than expected recently, but sterling managed to draw more support from upbeat PMI figures as well. UK retail sales are up for release and analysts are eyeing a 15.8% slide in consumer spending, which might push sterling back down again.

The ECB meeting minutes are also up for release and might contain more insights on what the central bank has in mind when it comes to boosting economic performance from the pandemic. Note also that the Franco-German recovery plan might provide some support from the shared currency.