EURJPY has formed lower highs that can be connected by a descending trend line on its 1-hour chart. Price looks ready to pull back to this falling resistance that lines up with Fibonacci retracement levels.

The 100 SMA is below the 200 SMA to confirm that the path of least resistance is to the downside or that the selloff is more likely to gain traction than to reverse. The gap between the indicators is widening to reflect strengthening bearish momentum.

Volume has been turning lower, however, but could pick up again as resistance levels are tested. Stochastic is on the move up but nearing the overbought region to reflect exhaustion among buyers and a likely return in selling pressure. ADX is still above 25 to confirm trending market conditions but is starting to turn lower to hint at a return to consolidation. 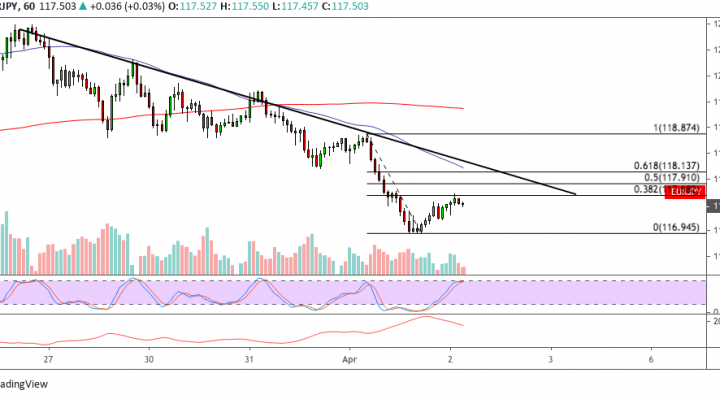 A break above the Fib levels and trend line could suggest that a reversal from the downtrend is in order, but price would have to contend with the 200 SMA dynamic resistance before heading further north.

There are no major reports from both the euro zone and Japan for the rest of the week, so risk sentiment could continue to drive price action. So far, risk-off flows have strongly favored the yen as the euro zone seems to be in a much more difficult spot compared to Japan when it comes to dealing with the COVID-19 outbreak.