EURJPY has formed higher lows and slightly higher highs to create a rising wedge on its 1-hour time frame. Price is testing the resistance and a bounce could take it back to the bottom around the 121.00 major psychological mark.

The 100 SMA is above the 200 SMA, though, so the path of least resistance is to the upside. In other words, resistance is more likely to break than to hold. If that happens, EURJPY could be in for a rally that’s at least the same height as the chart formation.

However, RSI has been indicating overbought conditions for quite some time and looks ready to head south, so price could follow suit as selling pressure takes over. Stochastic is also in the overbought zone to show exhaustion among buyers and a likely return in bearish momentum.

Stronger selling pressure could lead to a break of support and a selloff that’s at least the same height as the chart pattern. 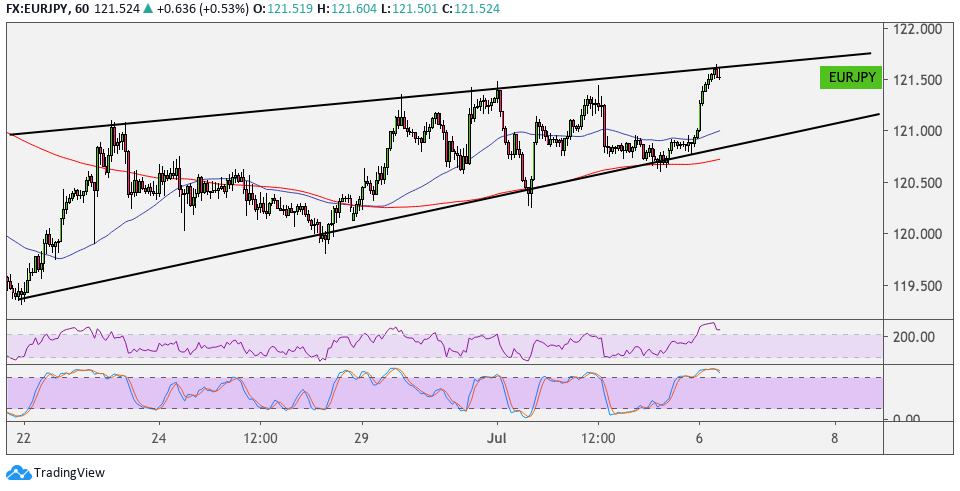 There are no major reports from the euro zone this week, leaving traders to pay more attention to developments related to the EU Recovery Fund. The Eurogroup is scheduled to meet this week while leaders of the EU nations will have another round of discussions next week.

Commentary on the allocation of the funds would likely impact euro direction, as any indication that the leaders could agree on a plan soon might mean more upside for the shared currency. Further signs of discord could weigh on the euro as it might delay any disbursement of funds intended to help the economy recover from the pandemic.

Meanwhile, the yen has been under downside pressure last week while risk appetite surged. Upbeat data from the US economy and China suggested that a recovery might be underway, which could mean weaker demand for lower-yielding currencies.