EURNZD recently broke through resistance at the 1.7175 area to signal that buyers are taking the upper hand. Price has since pulled back to this area of interest, which seems to be holding as support.

The 100 SMA is above the longer-term 200 SMA for now, but the gap between the indicators has narrowed enough to signal that bullish momentum is fading. A crossover might follow and draw more sellers in. If that happens, EURNZD could fall back to the next support area around the 1.6600 swing low. 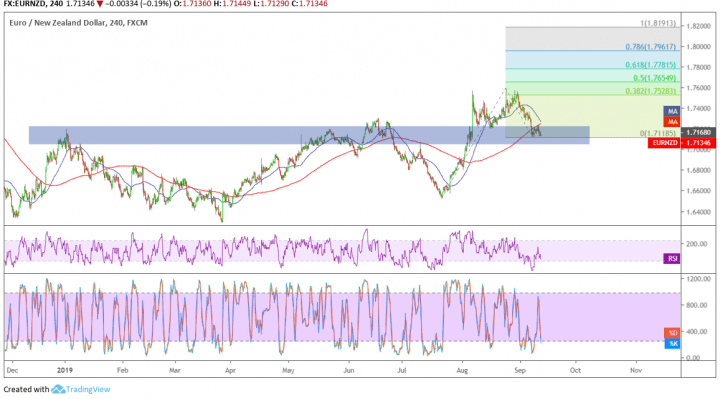 RSI is already turning higher from the oversold region to indicate that buyers are regaining the upper hand. However, stochastic is still moving down to signal that there is some selling pressure left that could take EURNZD in for a much deeper correction.

The upcoming ECB decision could determine where this pair might go next as the central bank is widely expected to ease monetary policy, possibly through a deposit rate cut or by adjusting their asset purchase program. Sources say that the ECB could announce a 0.10% to 0.20% deposit rate cut or adjust their lending requirements to banks to encourage more borrowing and spending activity.

In any case, dovish expectations are already in play, so there may be some profit-taking in the works. In addition, any form of reassurance from the central bank might wind up being bullish for the shared currency, unless Draghi does signal scope for easing in the coming months. Note that this will be one of Draghi’s last announcements as ECB head since he will be giving way to former IMF Chief Lagarde soon.