EURNZD formed lower highs and higher lows to create a symmetrical triangle on its 1-hour time frame. Price just bounced off the resistance and could be setting its sights back on support around 1.7400.

The 100 SMA is below the longer-term 200 SMA to indicate that the path of least resistance is to the downside, possibly even leading to a break of support. If that happens, price could be in for a decline that’s around the same height as the chart formation, which spans 1.7300 to 1.7600.

RSI is turning lower to indicate that selling pressure is in play and could be enough to take EURNZD at least until the triangle bottom. Stochastic is also heading south to show that sellers have the upper hand, and both oscillators have plenty of ground to cover before indicating oversold conditions. 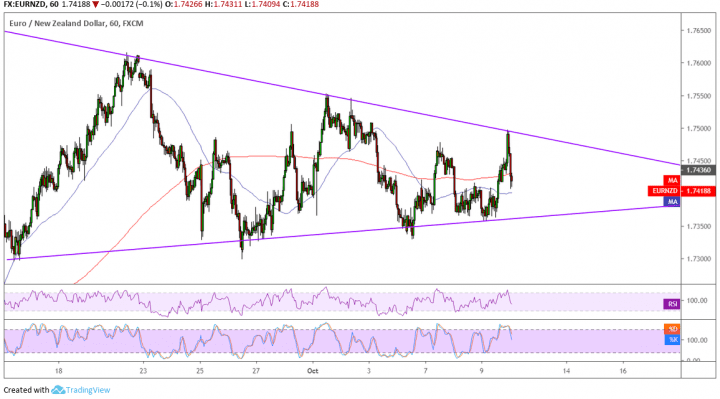 There’s not much in the way of top-tier data from New Zealand this week so Kiwi price action could hinge mostly on overall market sentiment. In turn, this takes cues from the rhetoric in US-China trade talks as worsening tensions could drag the higher-yielding commodity lower.

The euro has the ECB minutes to contend with and traders are looking for hints of further easing from the central bank. Recall, however, that there was some opposition among officials regarding the asset purchases so it will be interesting to see the divide among policymakers and how dovish they might lean in the next meetings.

The shared currency could also be pushed around by Brexit updates as PM Johnson faces a deadline to submit a new proposal to the EU. If he fails to get this through, he could be forced to negotiate an extension on the actual Brexit date – something that EU officials have insisted they are not willing to grant.