EURUSD could be in for a reversal from its uptrend as price forms a double top pattern on its 1-hour time frame. Price is halfway through on its move towards the neckline support at the 1.1100 area, and a break below this could spur a drop of the same height as the formation.

The 100 SMA is still above the 200 SMA, though, so the path of least resistance is to the upside. In other words, support is more likely to hold than to break. Also, the 200 SMA appears to be holding as dynamic support for now. If it continues to keep losses in check, price could bounce back to the tops at 1.1180.

RSI is also in the oversold region to reflect exhaustion among sellers and could be due to turn higher to reflect a pickup in bullish pressure. Stochastic is also indicating oversold conditions but has yet to move north to signal a return in buying momentum. 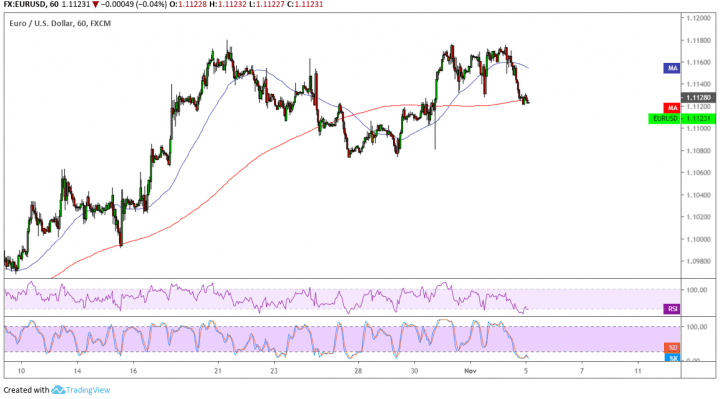 There’s not much in the way of top-tier reports from the euro zone, other than the release of the updated EU economic forecasts. Upgrades could drive the shared currency higher while significant downgrades could fuel expectations of more easing. Earlier on, new ECB head Lagarde gave a testimony and reiterated her plan to bring together the divided central bank.

As for the dollar, the ISM non-manufacturing PMI is coming up soon but the effect of this report could be muted since the NFP reading was already released last week. Still, a read higher than the expected 53.5 figure could spur some gains for the US currency as it could calm easing expectations.

The dollar could also take cues from updates on US-China trade talks as the prospect of a deal being signed within the month could be positive for the US economy down the line.