EURUSD has formed higher lows and slightly higher highs to create a rising wedge pattern on its 1-hour chart. Price is testing the top of the wedge and could be due for a move back to support from here.

The 100 SMA is still below the 200 SMA to indicate that the path of least resistance is to the downside or that the resistance is more likely to hold than to break. In that case, a drop back to the support at 1.0900 could follow or perhaps even a break lower. If the latter takes place, a selloff of the same height as the wedge could happen.

RSI is already indicating overbought conditions or exhaustion among buyers, so turning lower and moving south could lead to a pickup in selling pressure. Stochastic is also in the overbought zone and looks ready to head lower soon, so price could follow suit. 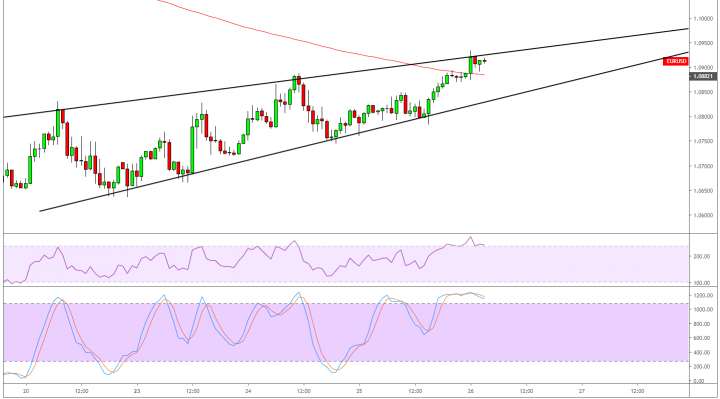 The dollar remains supported as a safe-haven asset in the longer-term, although the recent stimulus package approved by US government officials has spurred a selloff. Some say that the aid plan is too little too late, so it might not have much of a strong impact on the US economy.

Meanwhile, coronavirus updates in Europe continue to worsen, particularly in Italy and Spain. More and more fatalities are being reported for the latter, which could also make it a virus epicenter. In that case, the ECB could be hard-pressed to launch more easing efforts in order to keep the economy afloat.

With that, the dollar could still remain king if a flight to safety ensues. Of course this also depends on how outbreak containment efforts play out in the months ahead, but Europe seems to be in a much worse position at the moment.