On Saturday, Pompeo stated that the lack of extending arms embargo was a critical mistake.

US attempt of extending arms embargo failed terribly after this idea was opposed by China and Russia as Germany, Britain, France, and other 8 members refrained. 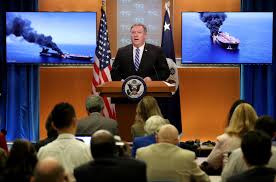 Pompeo said that he would continue pushing the extension of the arms embargo regardless of the opposition by many countries concerning the illegal embargo.

UN Security Council on Friday opposed the USA bid of extending the arms embargo that will expire in the month of October, which is in the 2015 nuclear deal.

According to Pompeo, the Trump administration will keep pushing its efforts on anti-Iran despite the diplomatic defeat.

Pompeo also said that Iran is the home of terrorists and urged the entire world to support the Washington campaign against Iran that commenced after Trump canceled the 2015 nuclear deal popularly known as JCPOA (Joint Comprehensive Plan of Action).

Pompeo also said that the Washington campaign was not only about the nuclear deal. But about whether the globe will permit Iran to purchase and trade weapon systems.

According to Pompeo, Washington had no plans of letting the arms embargo to fail ahead of the USA bid as Oil Prices Braces for Impact with Escalating US-Iran Tensions.

But, Iran’s permanent mission urges the Security Council to oppose the illegal motive. This was suggested by the USA of extending the arms embargo on Iran.

Countries like Russia and China who support the nuclear deal are opposing the USA policies specifically regarding this illegal arms embargo extension.

Joint Comprehensive Plan of Action (JCPOA) is a plan to extend the arms embargo. This was signed between China, UK, Russia, Germany, France, the US, and Iran. This was done on July 14th, 2015 and recommended on July 20th by UN.

Before the Iran nuclear deal, Iran was accused by the USA of tracking military nuclear program. But, Tehran ignored such accusations terming them as biased stating that they had a national nuclear program. They used JCPOA to conclude that both sides have agreed to forget any allegations regarding this. But, on 12th October 2017, Trump said that the USA was not part of this deal anymore.

The US is monitoring the Belarus situation after the disputed elections that were followed by protests; this was according to the USA state secretary Pompeo.

He said this during a press conference when he had visited Warsaw to discuss energy and cyber security.