The Fibonacci Fans binary options trading strategy discussed here aims to spot opportunities to initiate Call or Put trades using and indicator that draws specialized lines that spread out like a fan when applied on a chart. These lines are not drawn randomly by the indicator, but are drawn based on specific calculated areas known as the Fibonacci numbers. To understand the strategy, we need to understand the indicator for this strategy.

Fibonacci Fans are also called Fibonacci Projections. The tool in question is found under the Fibonacci group of indicators. These are indicators that identify potential price retracement or reversal areas based on the Fibonacci numbers. These numbers are located at retracement levels that are at 23.6%, 38.2%, 50%, 61.8%. 78.6% and 100%.

The Fibonacci Fan tool is used to catch retracement entry points within the contect of a trend. The fan lines resemble a hand-held fan which has been spread out, hence the name. The fan lines may either point upwards or downwards and the direction of the fan lines is a reflection of trend.

Chart Setup
In order to trade this strategy, the chart setup should be performed as follows:

Indicator Settings
To activate the Fibonacci fan tool and use it to perform the chart trace, click on the Insert tab on the top navigation menu. Then select Fibonacci, and then the Fans tool. You can modify the properties of the indicator as you wish, while retaining the original Fibonacci fan line settings.

STRATEGY
The strategy is to locate a retracement from a major trend, and then to seek out areas where price action will continue in the direction of the original trend. The Fibonacci fan lines mark out the areas where the price retracements will come to an end.

Since there are 5 of such areas, how does the trader determine the exact one where this will happen? Another tool is introduced and this is the Stochastics oscillator. This indicator can detect overbought and oversold market conditions. When the lines of the Stochastics indicator cross at overbought or oversold levels when price is at a Fibonacci fan line, this is the definition of the area where retracement will end for continued price movement to occur. The trader can then decide to enter a Call option (oversold) or a Put option (overbought).

Rules for Choosing a Call Option

A Call option trade aims to capture the renewed upside move following a retracement of price action from an uptrend. Therefore, a trade entry for a Call option should be made when the following setup occurs:

b) From an initial uptrend, the price retraces to a Fibonacci fan line. The price action candle in question must touch a fan line without the candle closing below that fan line.

c) The Stochastics oscillator lines cross at levels at <25, which is classified as oversold when price is at a fan line.

The setup for the Call option is displayed on the chart below. 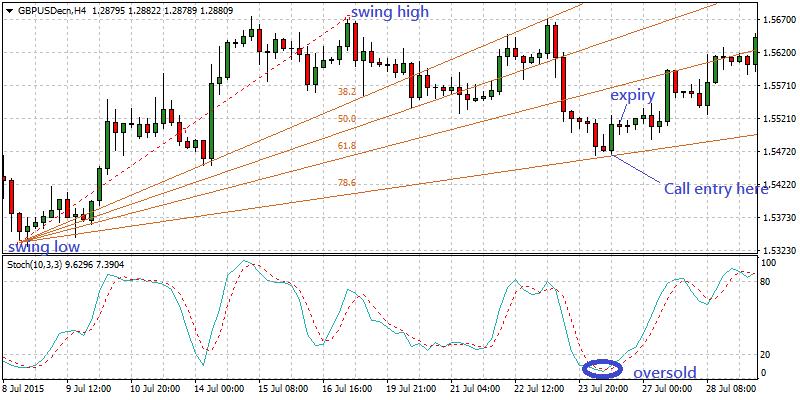 Here we can see the swing low and swing high. The price retraces several times to the fan lines, but it is only at the 78.6% line that the Stochastics oscillator is oversold. This is where the trade should be made according to the entry rules stated above.

Binary options trades must expire, and the usual pattern is for the broker to provide several options for expiry. The principle for trade exit with this strategy is to end the trade when the candle following the entry candle closes. Use the time frame chart to determine how long it will take from trade entry to the trade exit at the closing price of the 2nd candle.

For this chart, the time frame is 4 hours, therefore the trade exit should be set to 8 hours.

Rules for Choosing a Put Option

A Put option trade aims to capture the renewed downside move following a retracement of price action from a downtrend. Therefore, a trade entry for a Put option should be made when the following setup occurs:

The setup for the Put option is displayed on the chart below. 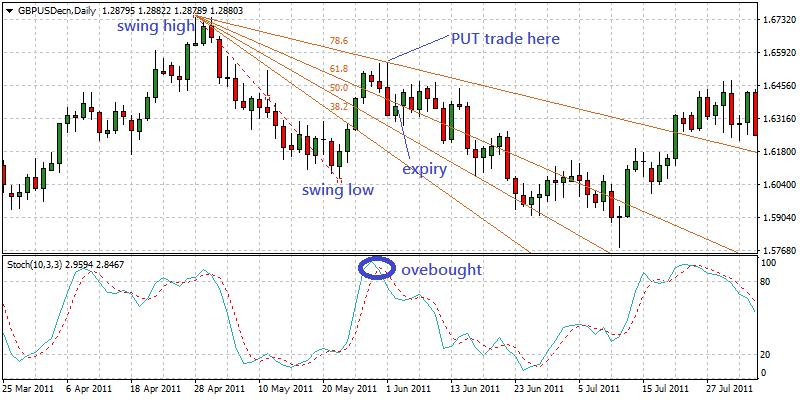 In this example, we can see that the retracement from the downtrend was to the 78.6% line, and since this was where the Stochastics was overbought, the Put trade is valid at this point.

For the daily chart, the trader has the option of selecting one or two candle lengths in determining the trade expiry. This is equivalent to an End-of-Day expiry.

Disclaimer: “Your capital may be at risk. This material is not investment advice.”