Over ten thousand Thai protestors were chanting the nation belongs to the people and they are tired of the dictatorship. These protests took place in Bangkok on Sunday and so far this is the biggest demonstration ever since the 2014 coup. 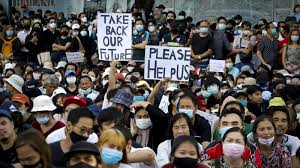 People cheered and called upon the students to restrain the monarchy’s power. They also demanded Prime Minister Prayuth Chan-Cho who is junta leader to resign. The people of Thai want a new constitution because it will assist to end the harassment faced by opposition activists.

In the previous month, the students were leading the protests. However, on Sunday the demonstration attracted a huge crowd from Southeast Asian country which experienced many years of protests under heavy surveillance by military coups.

Patsalawalee Tanakitwiboonpon who is a student activist stated that there was a need for a new parliament and election, this decision should be made by the people. He also said that the dream of Thai people is having a monarchy that is genuinely under the constitution.

In last year, Prayuth won the elections, which were conducted under rules making sure he maintained the power, this was according to the opposition. The popular opposition party was later banned.

Thai people are furious because of many cases of corruption and the arresting of many student leaders during early protests as well as the economical decline as a result of coronavirus pandemic.

Police and Free People Movement Organisers reported that there were more than ten thousand people protesting. However, another report from the police station of Chana Songkhram stated that they were below twelve thousand.

Government spokeswoman, Traisulee Traisoranakul said that the Prime Minister is sending his concern to protestors. And officials to abstain from violent protests, this was during a press conference with the reporters. She also added that the president has commanded the cabinet to take action of building understanding between generations.

Students have forwarded ten reforms to King Maha Vajiralomgkorn’s monarchy. This includes restraining his authority over the armed forces, royal fortune as well as the constitution.

Anyone who criticizes the monarchy should be detained for up to fifteen years, according to Thai’s lese majeste law. However, Prayuth has reported that the king said that this law should not be used at the moment.

Dozens of royal citizens held their demonstration walking with gold-framed portraits of the royals and the king, and waved their flags, as the opposition was continuing with the protests as The U.S. Demands Transparent Probe into Lenanon, Beirut’s Overwhelming Blast.

Royalist Thai leader Sumet Trakulwoonnoo said he cared less about the anti-government protest provided they don’t interfere with the monarchy.