This article aims to explain the breakout as it occurs in the forex market and how traders can take advantage of this occurrence. When you consider the fact that breakouts occur on forex charts very frequently, it puts a responsibility on the trader to get acquainted with breakouts, learn how to recognize them and how to position themselves to take advantage of them.

What is a Forex Breakout ?

A breakout in forex occurs when the price action of a currency pair performs a strong movement as to extend beyond a pre-established range of prices. In other words, a forex breakout is seen immediately after a period where prices have been in consolidation or have been range-bound. This will be illustrated in some of the setups later on in this article.

What Triggers the Breakout?

There are two sides to a trade: the buy (long) and the sell (short) sides. Breakouts are triggered by a massive influx of traders into the market as they take positions on one side of the trade in excess of the other side after a period of sitting on the sidelines awaiting major market news to give them trade direction. The price of the currency therefore follows the law of demand and supply. The more demand/less supply there is for one of the currencies in the pair, the more likely it is that the breakout will occur in the direction which gives that currency more value.

Let us use the EURUSD as a focus currency to explain this. If the EURUSD has been range-bound for some time and a news release comes out to impart potential value to the US Dollar, we will likely see more trade orders selling the EURUSD and causing a downside breakout.

OK, so now we know the theory behind a breakout. But the question is: how can you as a forex trader, recognize a breakout when it occurs? Timing is important in trading the breakout so you’ve got to be able to spot one when it happens and act on it before the ship sails.

A breakout occurs in the following circumstances:

Please take note of the terminology. The candles in question must be allowed to close, and they have to close on the other side of the support or resistance lines. Merely going to the other side without closing is not enough, as the position of the closing price relative to the key level of support or resistance has to be used in making the breakout trade decision. There are numerous examples of candles which breach these key levels, only for some late reversal action to send them back to where they came from. These are “fakeouts” and will only produce losses.

To round off this article on the breakout, we will illustrate the commonest breakout scenarios you will encounter in the forex market. You will most likely encounter breakout strategies in the following situations:

a) During a major news release which comes immediately after a period of market consolidation. Trend lines drawn across the price highs and lows will delineate the range of prices within the consolidation period so that spotting the breakout will not be a problem. 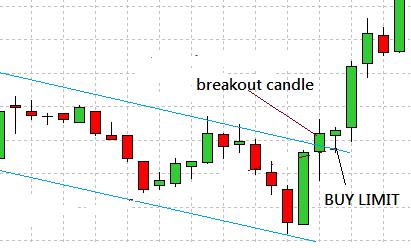 b) When price bursts out of chart patterns that enclose price action for a while. Examples of such patterns are wedges, triangles and channels. 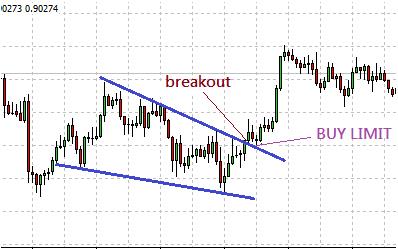 Breakout from a wedge pattern 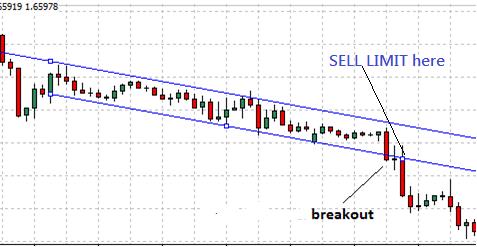 Breakout from a channel

c) Breakouts can also be traded out of the pivot points that are plotted on the hourly charts. Please note that only the 1 hour charts can be used to trade the pivot point breakouts.

For the pivot point breakout setups, you need an automated pivot point calculator to plot the points afresh every new trading day. This not only takes the stress of daily manual calculation away, but also provides a visually appealing and accurate plot which the trader can easily trade off from as soon as the signal appears.

When setting the stop loss and profit targets for breakout trades, these principles hold sway: