The GBP/USD currency pair is holding firmly to the current monthly gains above 1.2350 despite a few pullbacks that have threatened to trim off the cherry. The currency pair has been on an upward trending movement since bottoming at around 1.1960 on Sep. 3, but this week it has struggled to add significantly to last week’s rally.

The currency pair also appears to be creating a similar pattern to the one preceding the end of August collapse in 1,2,3,4,5 Elliot’s Impulse wave. This could trigger another reversal in the current trend if a breakout from the bullish wedge occurs.

From a fundamental perspective, the GBP/USD currency pair is trading at the back of a busy day in the UK economy amid growing anxiety around Brexit. On Monday, the UK Industrial and Manufacturing Production beat expectations on both the (YoY) and (MoM) basis.

Analysts were expecting a monthly change of about -0.1% and an annual change of -1.1% in Industrial Production for July, but the latest numbers showed a change of 0.1% (Monthly) and -0.9% (annually).

On the other hand, Manufacturing production beat similar expectations with 0.3% monthly change and -0.6% Annual change. However, the non-EU Trade Balance deficit expanded to GBP 1.932B from the previous figure of GBP 1.771B. Total Trade balance for July came in at -GBP0.219 Billion down from GBP1.779 billion in the previous period. 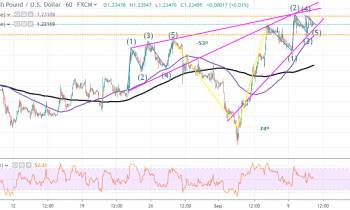 Technically, the GBP/USD currency pair appears to be trading under extreme bullish pressure in the short-term as depicted by the early rally at the start of the month. The Relative Strength Index Indicator shows that the pair could still rally higher since it is far off the overbought zone.

Therefore, going into the mid-week, the bulls will be targeting short-term profits at around 1.2376 while the bears will hope for a successful pullback down towards the 1.2315 level. 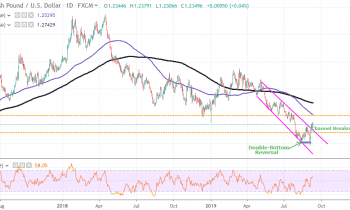 In the daily chart, the GBP/USD currency pair appears to have recently made a bullish breakout above the trendline resistance in the descending channel as demonstrated in the daily chart.

The pair appears to have performed a double-bottom reversal pattern which started to form in august and completed at the start of September. This creates some interesting long-term trading opportunities for the bulls and the bears.

In summary, the bulls will be targeting long-term trading opportunities at around 1.2510 while the bears will look to pounce on a similar time frame at around 1.2196. The bulls appear to have short-term control but the bears still hold all the cards in the long-term.